Karl Rockett won his first club road race in a fascinating event on the Ballygowan Circuit this evening.

A strong limit group of eight riders were given a start of 5 minutes on the middle group.

The limit group at the start

The middle group at the start

Scratch were originally due to start 4 minutes later, but with three entries not turning up this was reduced to 3 minutes. 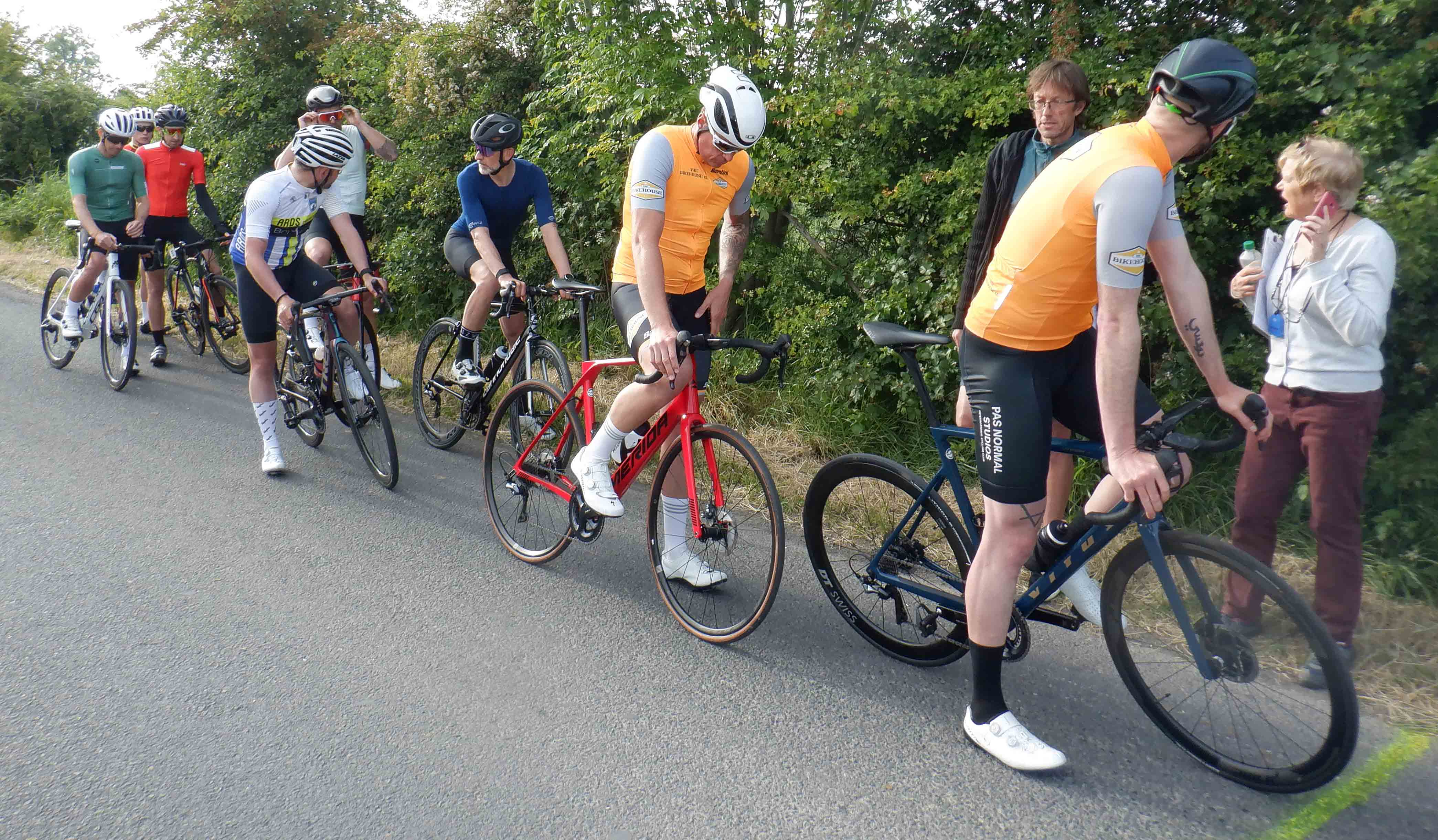 The scratch group at the start 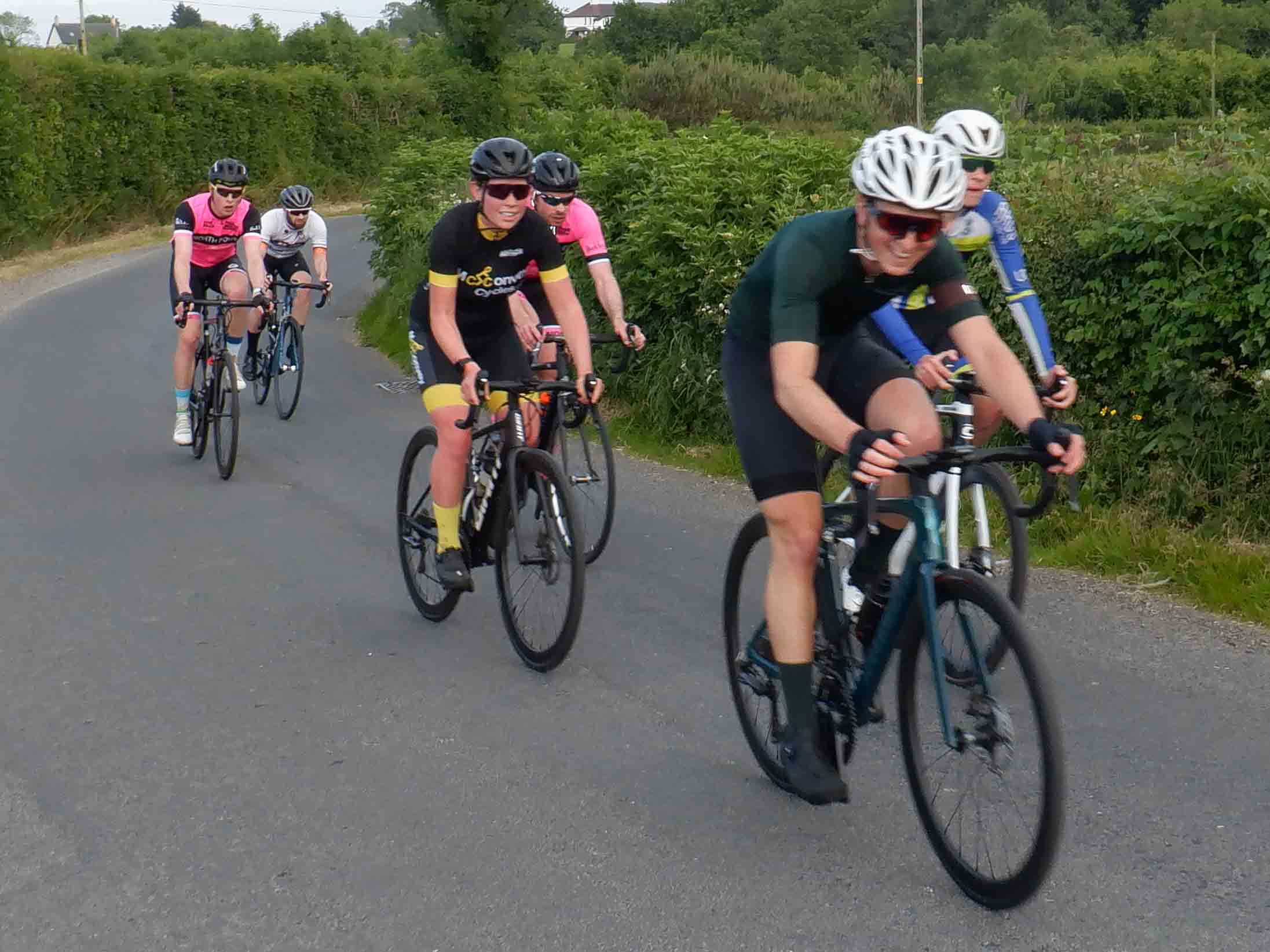 The limit riders still smiling at the bottom of the Burn Road climb on the second lap.

First time up the Burn Road the groups were already splitting on the climb. 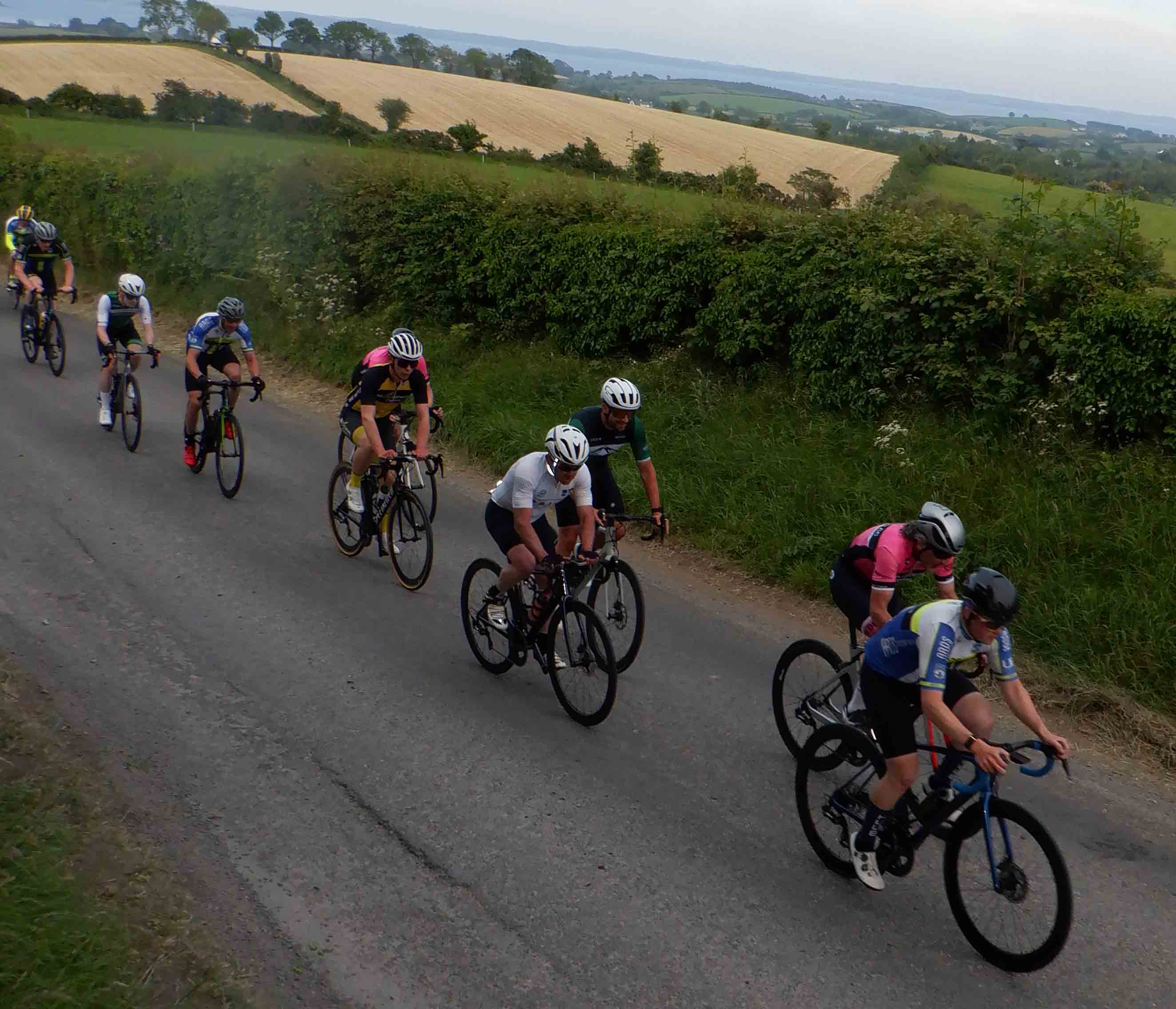 The middle group strung out on the second lap

By the end of the second lap, the gap between front and back groups  was just over 4 minutes, and it looked like it would be touch and go whether scratch would reach the front by the end of the four lap race. 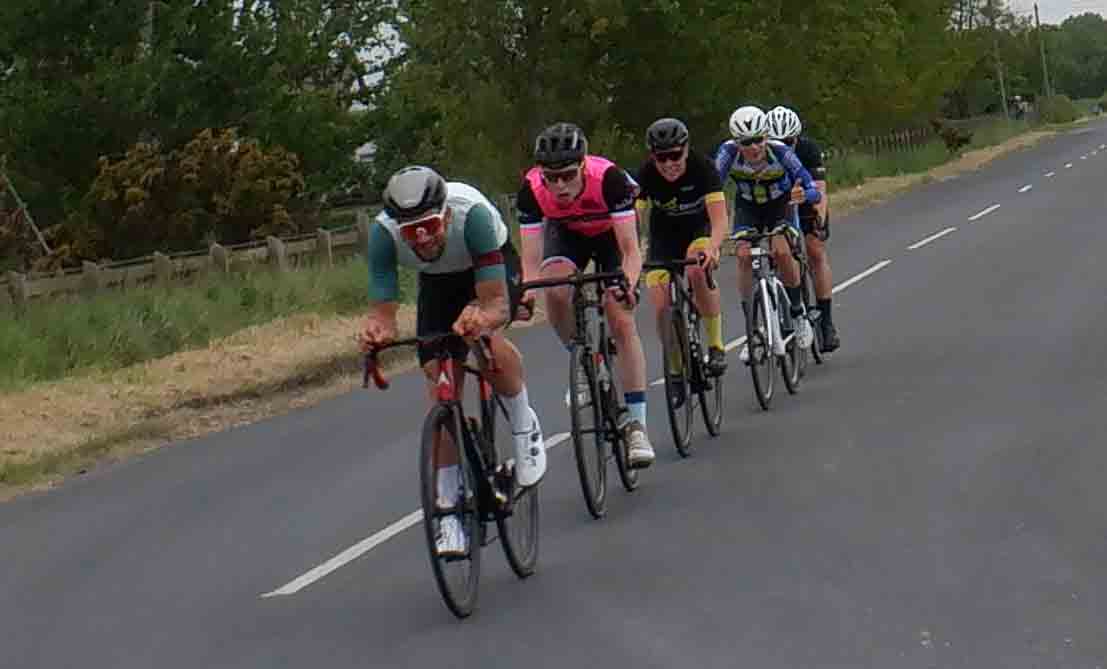 Karl (fourth in line) shows his appreciation as Peter McLean drives at the front.

But  on the third lap, Peter McLean (now a lap down) jumped into the front group and gave them a helping hand. 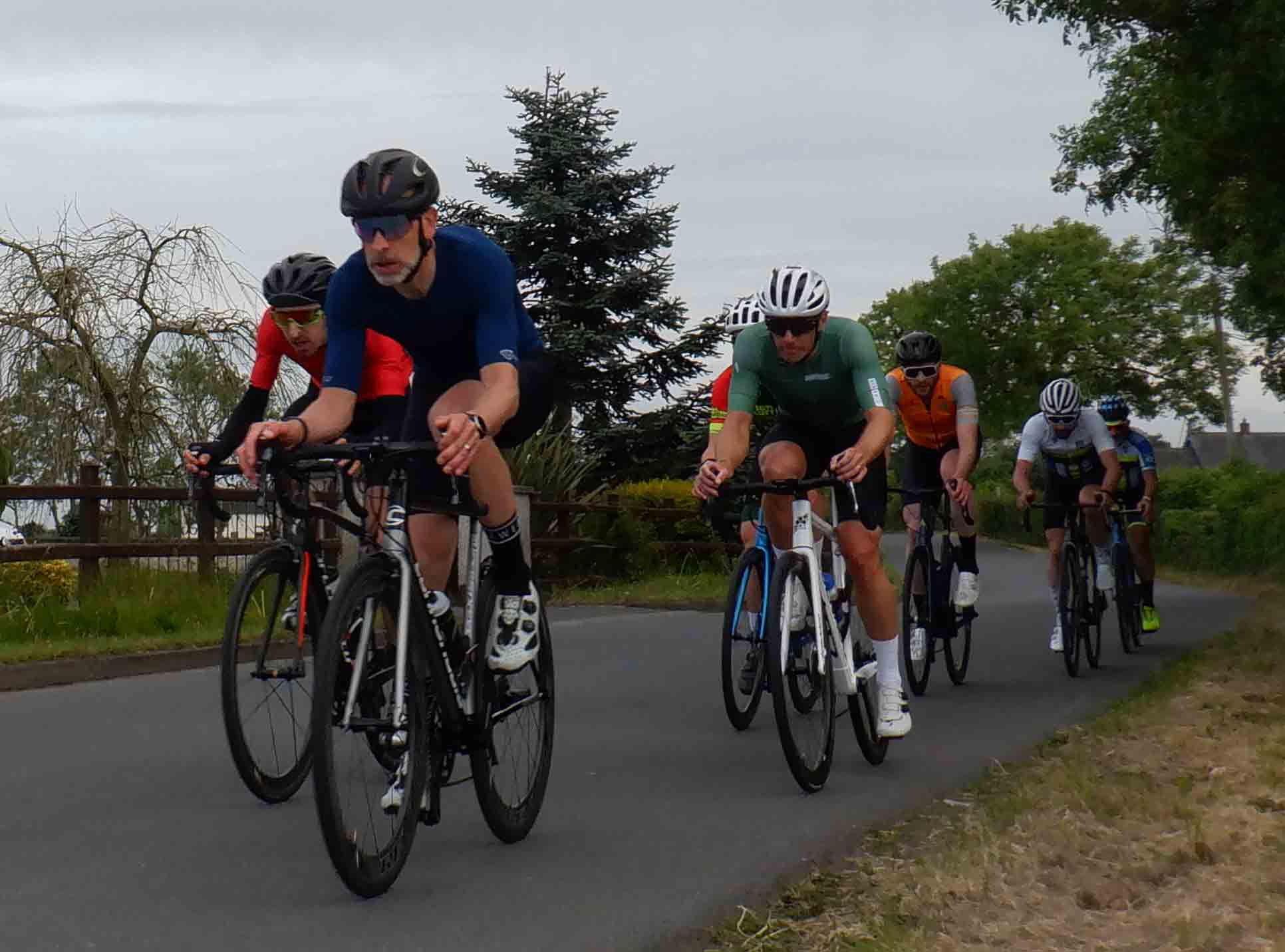 And Neil McKenna (also a lap down), had re-joined scratch and was helping them. 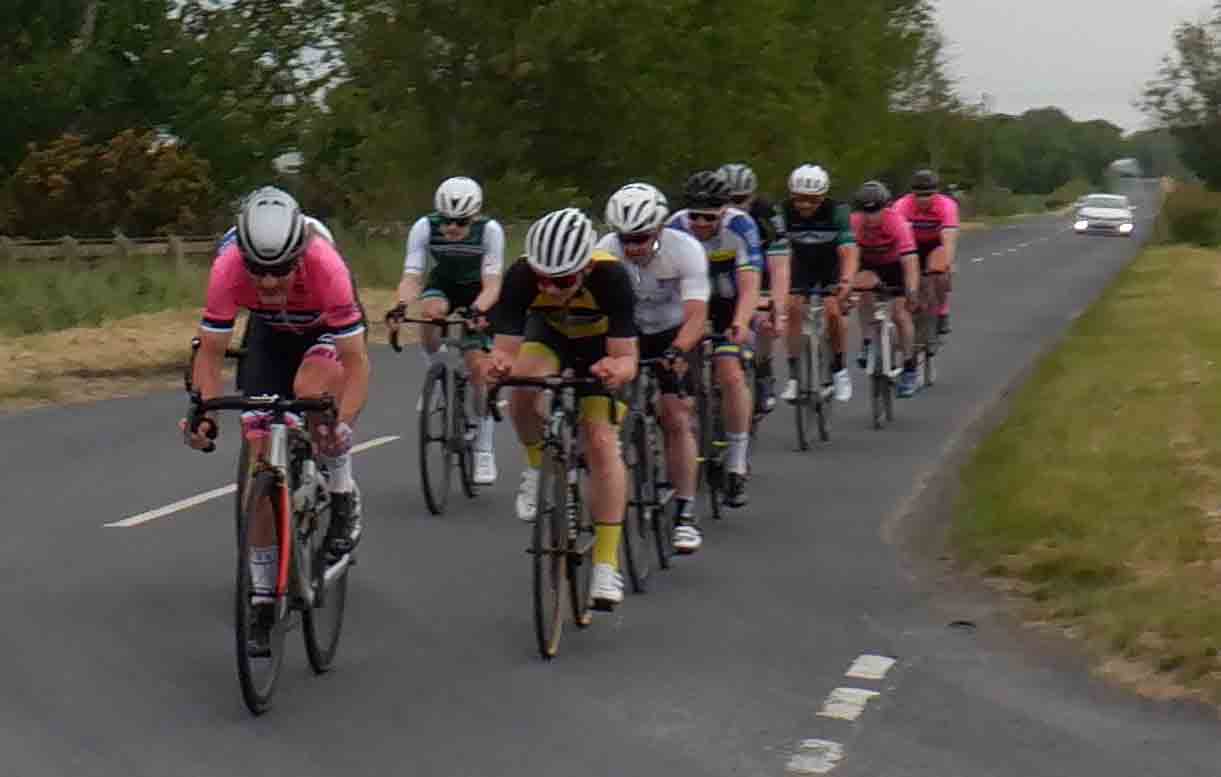 Peter McLean pulled over on the fourth lap, but four riders from the limit group managed to hang on and sprint for the win, where Karl got a clear verdict from Jon McCreedy (North Down CC), Joseph Giles (Ards CC) and Amelia Tyler (McConvey Cycles).

About 30 seconds later, Nathan Keown (Dan Morrisey – Pactimo) was first of the scratch riders in fifth, with Marc Allen (Ards CC) also getting clear of the chasers to take sixth.

When the dust settled, the judges decided to let the result stand, but all riders are reminded that if they have a problem and take a lap out, then it is acceptable to rejoin and ride at the back, but they should not get involved in the race as this can distort the result.

Thanks as always to the marshals, motorbike lead and the judges. There were a lot of tractors hauling grass around tonight, but everyone got round safely. 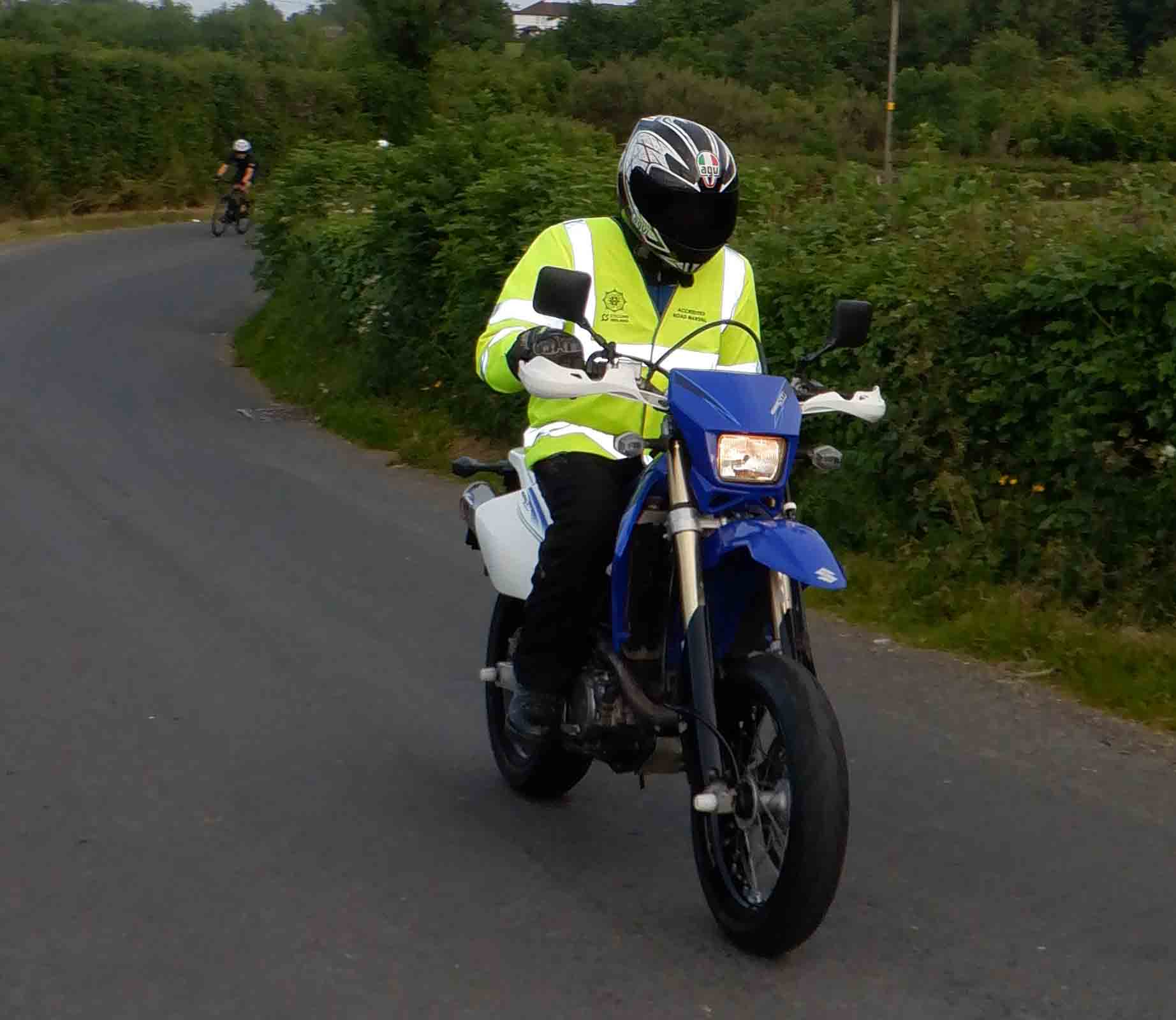 Unfortunately next week’s time trial has had to be cancelled due to ongoing roadworks at BallyWhisken, but we plan to award the Magreechan Cup at the 25 mile time trial later in the season. Our next event will be a Trail Quest on 21 June – more details about the meeting point will be shared later.