There have been lots of crazy endurance rides in recent weeks, and the bar was raised even higher last weekend.

Everesting is a very simple idea – pick a hill, and ride up and down it repeatedly until you’ve reached 8848m – the height of Mount Everest. An Australian group called Hells 500 maintain the rules, and the official list of people who have completed the challenge, at everesting.cc.

Local interest in the challenge was sparked when Ballymena rider Rob Lawrence broke the Irish record with 11 hours, 50 minutes and 24 seconds a couple of weeks ago, and the stickybottle website published a full list of all Irish qualifiers. 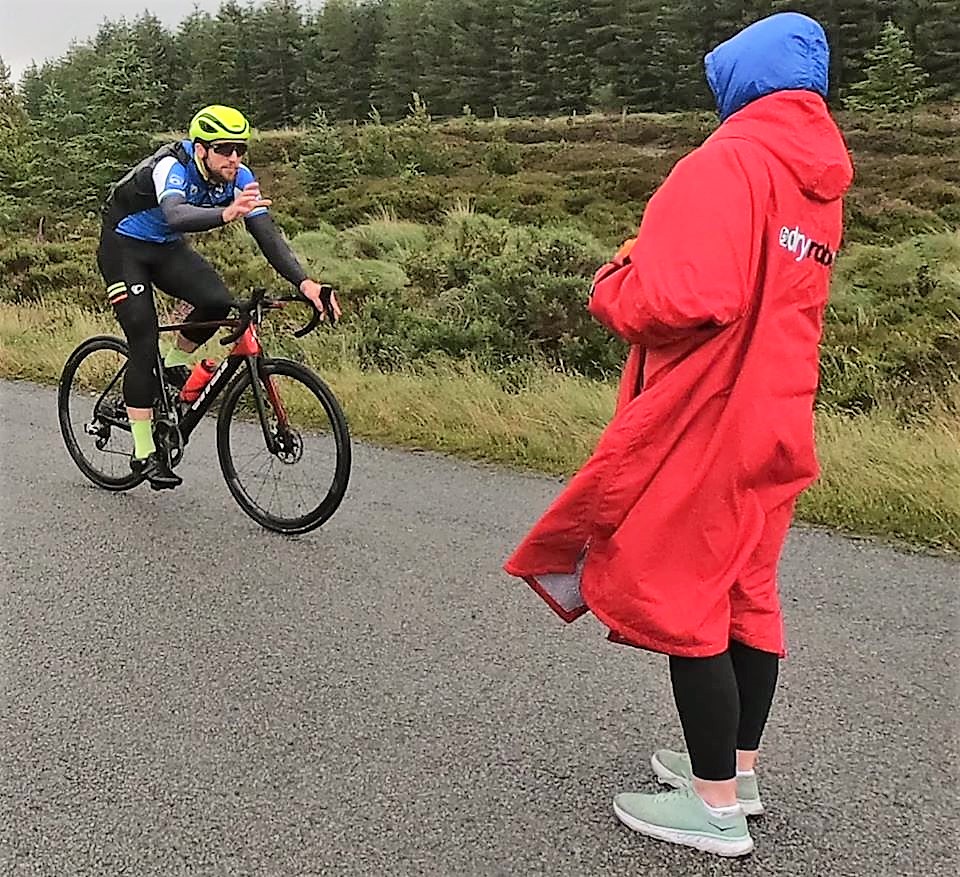 Peter taking on supplies at the summit

Faster of the two was Peter McLean, who chose the classic Shay Elliott climb in the Wicklow Mountains. After 36 ascents, he completed the challenge in 10 hours and 59 minutes, beating Rob’s time by almost an hour (and the previous record on the same climb by almost 4 hours). Awesome! Click here to see a report on Peter’s ride on Dany’s Belgian Project site.

The second rider was Alastair Martin, who completed 80 ascents of Carrowreagh Road in Dundonald in a more leisurely 12 hours and 28 mins. 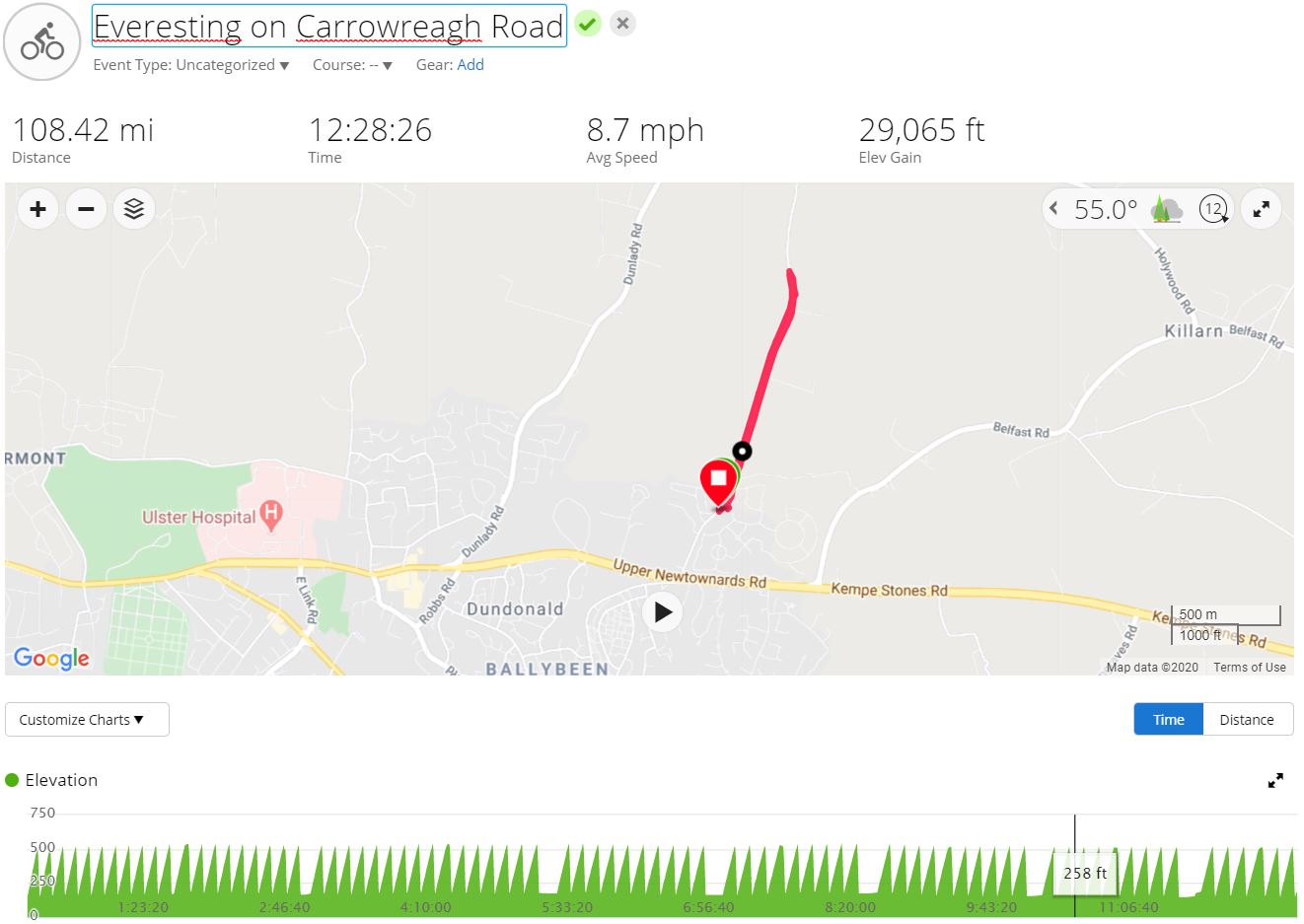 For those who like stats, here are some more details from Alastair’s ride. 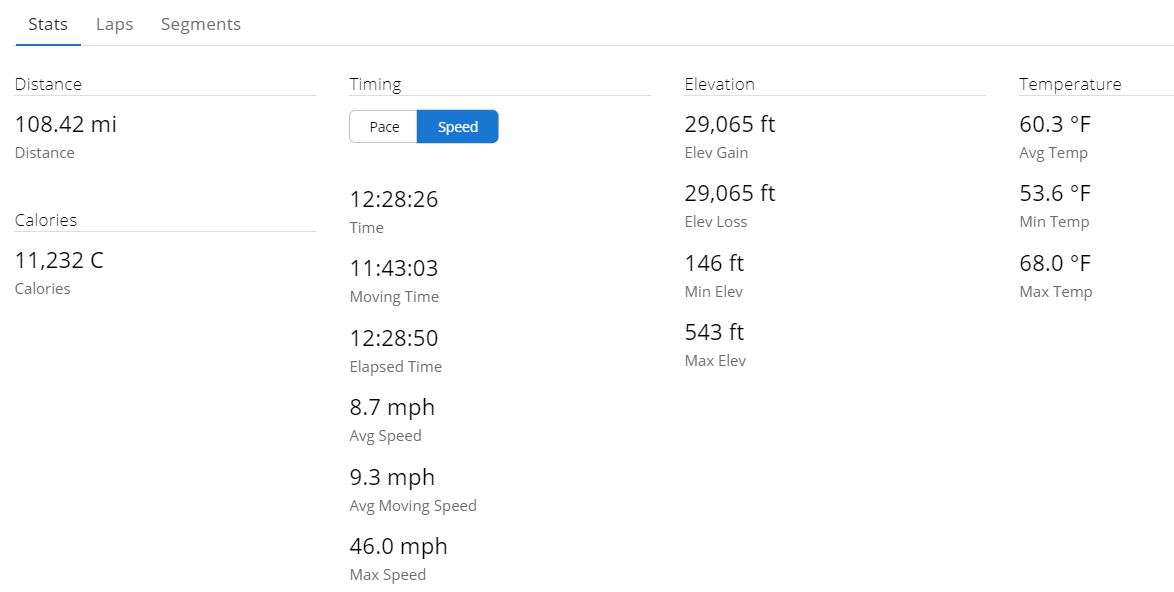 Rob and Peter had support teams present to verify their rides, and hopefully they will be formally ratified by Hells 500 in due course. Alastair’s ride was more casual – he set off with a couple of bananas in his back pocket, and only has the Garmin trace above to record his day out.

Ards CC now has (unofficially) two of the fastest 3 everesting times recorded in Ireland – a fantastic achievement that builds on a long history of hill climbing in the club.

Why not try a climbing challenge yourself. It doesn’t have to be the full Everest – it could be Slieve Donard (850m) or Ben Nevis (1345m), or maybe a quarter or half Everest.

Here are some things to consider –

Pick the hill carefully. Too gentle and you’ll spend a larger proportion of your time descending. Too steep and you’ll not be able to get up it once tiredness sets in. It is interesting that Peter chose a long hill (36 reps), Rob chose a short hill (171 reps) and Alastair chose a Goldilocks hill in the middle (80 reps).

Training. Look at Alastair’s calories figure above. Within a couple of hours you’ll have used up most of your glycogen, and it will be difficult to eat enough. Basically you’re going to be burning fat for most of the day, so train you body for this.

Weather. Saturday was wet and breezy, but that may have helped the riders, keeping them cooler on the climb. A tail wind on the ascent may also help, as you’ll be free wheeling on the descent anyway.

Be prepared for a hideously hard day. The biggest challenge is probably mental. After two and half hours and over 7000 feet of climbing, its a bit frightening to realise you’re only a quarter of the way through. Try breaking the challenge into smaller chunks, and only focus on the next chunk.