In spite of a clash with the Euro football coverage, this evening’s road race at Orlock attracted a healthy field of 29 riders. After the limit group took advantage of a generous handicap allowance in the last race and stayed away, the time keepers tighten things this time round, with a four minute gap to the middle group and just another 30 seconds to the three scratch riders.

We never got a chance to find out if the new handicap would have been closer because a crash on the first lap took out a number of the front group riders, including Kyle Adams (Ards CC) and Brian Wylie (Castlereagh). There were some cuts and bruises – we wish them all a speedy recovery.

By the third lap all the groups were together, and James Ambrose (North Down CC) and Ricky Topping (Ards CC) had a slight gap on the bunch. Next time round their lead had grown to 20 seconds, but it still looked catchable. However, there may have been some tactical riding in the bunch as the Ards riders jostled for road race cup points, and the leading pair gained another five seconds on the final lap. At the finish, James took a clear win from Ricky. 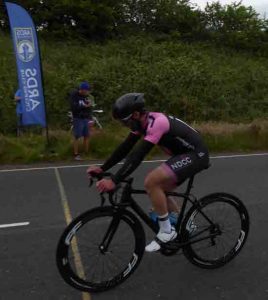 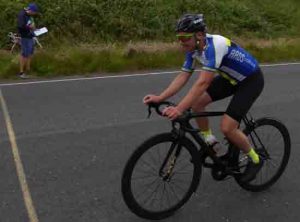 Club secretary Gareth Murray took the bunch sprint for third from Wayne Garrett (Ards CC), Ian McClure (Northern) and Robin Wilson (Ards CC). Paul McMinn got 5th Ards riders and Ian Carson just pipped David McCamley for 6th Ards. The latest standings in the Club Road Race Handicap Trophy are shown in the table below. It’s very close at the top, and with three road races still to go there is all to play for.

Gareth Murray is well clear in the sprint for third