So far we’ve looked at the physical side of preparing for cycle racing. Mental preparation is also key to success.

There are three strands to mental preparation.

First – you’ve got to believe in yourself. To have inner strength. When the going gets hard, and others are starting to drop by the wayside, you’ve got to fight on.

In the early days of cycling (and in other tough sports like boxing), many of the champions came from extremely poor and tough backgrounds. They had to fight for survival as kids, and the lessons they learnt there underpinned their sporting success later in life.

Today, most of us come from relatively comfortable backgrounds, but there is still lots that can be done to build mental strength. If you skip training because it’s raining, don’t give it 100% when sprinting, and hide at the back of the club run and miss your turn at the front, then you’ll get trapped in a vicious circle – you won’t improve as much as your rivals, you’ll lose a little confidence, you’ll put less effort into training, and down it goes…

On the other hand, if you work hard during training sessions, seek out tougher challenges, resist the extra cake when trying to lose a little weight, and so on, then you’ll enter a virtuous circle where your growing fitness and self belief re-enforce each other.

Second – you’ve got to beat your rivals mentally as well as physically. Cyclists love to play mind games with their rivals, and it is a big part of cycle sport. You’ve got to build on your self confidence (above) and convince your rivals that they can’t beat you. If they know you’ve been riding strongly in training, they might not even try to attack you in a race. If you’re going through a bad patch in a race, can you hide it from your rivals and discourage them from attacking until you feel better? And if you’re feeling good, can you also hide that until the moment when you spring your killer attack? 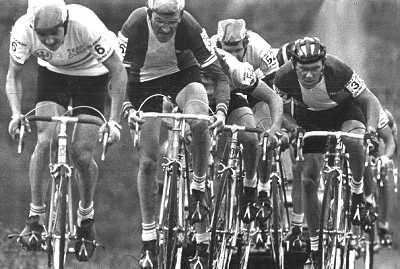 Billy Kerr tracks Stephen Roche in the 1978 Tour of Ireland (Photo – Peter Purfield). Is he reaching for the gear lever..?

Former Ballymena rider and Irish International Billy Kerr was famous for changing up a gear on the hardest slopes of a climb. When his rivals were suffering most, Billy hit them with a vicious psychological blow. Even some of the toughest Soviet riders in the 1980s Milk Race Tour of Britain crumbled in response to this tactic.

Finally – you’ve got to want to win. Chris Froome recently (Dec. ’15) shared some of his training data, showing that he was able to produce about 510 Watts while a 75+kg new professional, and was still able to produce similar power after losing up to 8kg in preparation for the Tour de France. There are numerous riders in Ireland who have been able to produce similar power at a similar weight. But very few of them have gone on to have major international success. In top level cycle sport it is not enough to be the fittest – you’ve also got to want to win. This isn’t necessarily a particular nice personal trait. Many folk are just too nice to deliver the killer punches necessary to win.

Whole books have been written about how to prepare mentally for cycle racing. There’s only been space here to give you a feel for the area, but hopefully there’s been enough to make you think about it 🙂

Our final coaching article gives answers to some common questions.