To round out our introduction to coaching articles, here are some answers to common questions. If there is anything else you’d like to ask, let us know!

Q1 – Should I train in a group or by myself?

There are lot of benefits to riding in a group – there’s the craic and opportunity to learn from other riders, and the chance to pick up group riding skills that you can’t do individually. A group also let’s you measure yourself against the other riders in the group, and they’ll often push you harder than you might have tried yourself!

The main downside is that you can’t control what the group does – if you want to do one hour of intervals, then there is no point trying to persuade the Sunday club run to do that. Some clubs organise “chain gangs” for short, hard speed sessions, but speed training is highly unsociable and difficult to control in a group – it’s likely to be too easy or too hard.

So to answer the question, I would suggest a mixture is best – longer runs at the weekend in a smallish group (6-10 riders), and midweek speed/strength sessions by yourself.

Unless you are a professional or top amateur racing a lot, there is no need for supplements – a normal, balanced diet is fine. There are a couple of points worth noting –

Pros get given their bikes, and can afford to train on their best bike. The rest of us are generally not so lucky. Also, if you’re training in the winter on dirty, wet roads, you’re going to want a bike with heavier tyres and mudguards. The most important thing is that the riding position on all you bikes is as similar as possible so that you can easily move between them. And think of the psychological boost when you step from your heavy old training iron to your stripped down racing machine! 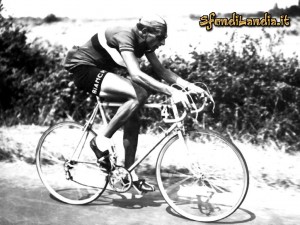 It is said Coppi was always in bed by 9.30pm

Sleep varies a lot between people, and also changes as you get older, so there are no hard and fast rules. But training is tiring, so expect to need more sleep if you are training hard – maybe an hour or more per day. You might also feel the need for a recovery power nap in the afternoon after a long session. And even when you’re awake, you’ll need more time for relaxing, so be realistic.