The simple answer is YES – absolutely. Here are the why’s, what’s and where’s…

WHY?  A warm weather training camp is a chance to escape from the cold, wet, windy weather of Northern Ireland, and get in a solid block of training before the season kicks off. You’ll have the chance to ride on exciting and challenging new terrain. You might even meet up with some of the pro teams also escaping to the warmth of southern Europe.

And you’re sure to come back with some great stories! (check out the picture captions) 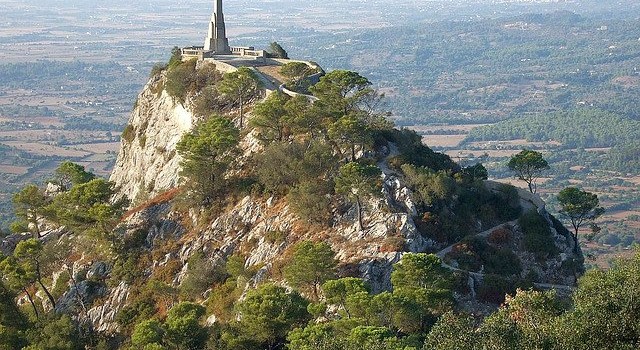 Eastern Majorca is generally flat, but there are three monastic sites at the top of spectacular short climbs. This one is San Salvador (5km climb, 510m). I remember riding up this in the early 1990s. The speed always builds up on the approach. Robert Miller and Martin Earley were on the front of our group, and it was already down to 20 riders when we hit the climb proper. Within a kilometre, there were just 5 of us left. Another 500m and the rider in front of me cracked. I couldn’t even close the one bike length to Miller’s back wheel. 2km in, and the triathlete we picked up on the run in, and I, both started to slide backwards as well. I secretly cheered for Earley, but with 2.5km to go, he too was shelled. Millar put in one last dig to make sure there was no chance of us getting back on, and then the exhibition began. We caught occasional glimpses of him in the hairpins above us. Awesome.    It was some consolation to see the sweat dripping off Millar at the top. And he did go on to win the British Pro championships that season, riding away alone on Snaefell. But the bottom line is that this happened over a decade after his Tour de France polka dot jersey win. Just how good was he? Inspirational.

Where? The most popular destination is Majorca. Tens of thousands of cyclists descend on the island in March and April. The roads are fantastic – smooth, fast, with a choice of mountains in the west and flatter runs in the east. And there are lots of well marked routes, and support facilities like bike hire, cyclist friendly hotels and cafes.

The Canary Islands are also popular, particularly Lanzarote. They are further south, so you’re almost guaranteed better weather, particularly in February. But the exposed lava terrain has rougher roads and it is always windy, so don’t expect to do as big a mileage as in Majorca.

Southern Spain, Italy, and the south of France are also popular. 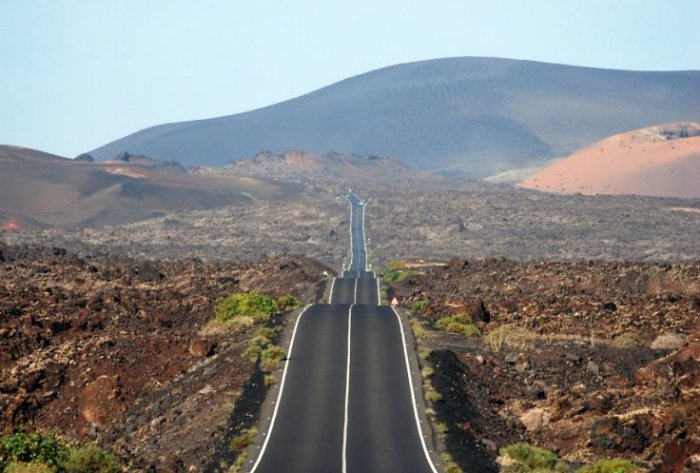 Classic shot of the road through the lava fields of Parque Nacional de Timenfaya in Lanzarote. This is brutally hard terrain. Two to three hours is plenty for most riders. In 1995, we stayed at the same hotel as the Danish national squad, and a certain Bjarne Riis. The Danish guys took it in turns to ride at the front with Riis. And then he’d do another 3 or 4 hours by himself in the afternoon. He won the Tour the following year, but later admitted taking banned substances. Even so…

WHEN? Many riders try and go before the big Easter stage races at home. The Canaries are best if you want to go in February. By March, Majorca is also popular, although you might still get a wet day (or even a dusting of snow in the mountains). By April, Majorca is just about perfect! 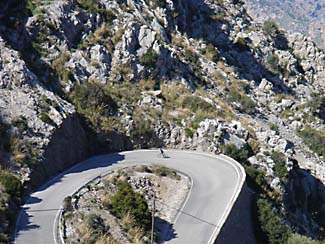 At the top of this climb, Tony Doyle warned us to take it easy on the descent. The English riders all nodded seriously, but I saw a glint in Kelly’s eye. It was just one year after his legendary victory in Milan San Remo… We set off, and I was glued to Kelly’s wheel. A couple of fast Z-bends, and we’d already gained a couple of hundred metres on the group. And then came first hairpin. All I had to do was sit on the wheel and follow him round… In the blink of eye we were round and I was 3 or 4 bike lengths back, sprinting to regain contact. How did he do that…? So that’s how he won “La Classicissima”.

WHAT? Most riders plan to do a block of long, steady runs, with perhaps a few sprints thrown in to liven things up. Elite riders with easily do 500-600 miles in a week in Majorca. In Lanzarote, expect to do about half that distance. Plan your week carefully – perhaps start of with shorter runs, and build up to a special long run mid week. And don’t be afraid to take an easy day if necessary.

Check out our training guide and plan how this fits in with your goals for the season.

Riders used to take their own bike, but many now hire a bike when they get there – it’s almost as cheap, and saves the hassle of packing it for the plane and coach transfers. And there are great bikes available at reasonable prices.

HOW? There are three basic options –

Any risks to be aware of?  Just a couple –