The Ards Cycling Club Annual Awards Dinner is on 11th November this year in Clandeboye Lodge. All members should have received an email about this. It’s always a great night, so please let us know if you’re planning to attend.

A chance to congratulate our competition winners

Many of the club trophy winners have already been announced as the club racing season drew to a close. But one competition takes a bit more calculation – the Best All Rounder. Read on to find out what BARs are all about… or just skip down to see the final standings in this year’s competition. 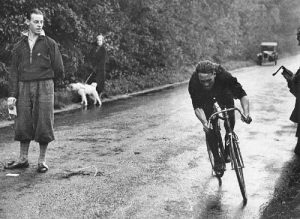 So first, some history. In 1888, the National Cycling Union banned mass start racing in Britain. Cyclists got round this by organising individual time trials, and this branch of the sport thrived. In 1930 Cycling magazine (now Cycling Weekly) organised a Best All Rounder competition to find the best time trialist in Britain. The idea was to take a rider’s best rides at 3 standard distances, and “average the average speeds” to find the fastest rider. The times could be recorded on any course in the country, at any time during the season. The British BAR was a huge success, and is still very popular today. There’s more history here.

Ards Cycling Club always had a strong  history in time trialling. When the current competitions were being reviewed in the late 1970s, it was only natural that some BARs were included. The most prestigious is the Club Senior BAR. It was originally based on all Ards CC 10, 25 and 50 mile time trials, although this changed to 5, 10 and 25 in the early 1990s as club 50 mile time trials were dropped.

This year, it was great to see 11 riders complete rides at all three distances. The final standings are shown in the table below.

The club has three other BAR competitions.

First is the Open BAR. This is the same as the Senior BAR, except that times recorded in open time trails also count. It is up to each rider to tell the committee if they have any open times they want to be considered (because it is not feasible for us to keep track of all open performances). In recent years, no riders have notified us of times, and so this trophy has not been awarded. If any rider has open times they’d like to be considered, please let us know! 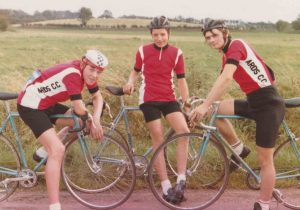 Second is the Schoolboy BAR. It was felt that 25 miles was too long for riders under the age of 16, so a separate BAR was set up for underage riders. It is based on the rider’s best two times at 5 miles and best two times at 10 miles. In the 1980s, this was hotly contested, but in recent years there have been no qualifiers. Hopefully someone will take up the gauntlet next year. And ignore the politically incorrect name – girls are eligible too!

Finally there is the Vets BAR. This is open to any club member aged over 40, and is again based on club 5, 10 and 25 mile time trials. But the competition is handicapped based on the rider’s age. The club uses a set of “age standards” set by the Veteran Time Triallists Association. These are basically a set of times for each standard distance, for each age. Click here to see the standard times.

For example, a 40 year old man has a standard time for 5 miles of 12:55. If our 40 year old does 12:30, then he is said to have “plus 25 seconds” on age standard. The age standards have been carefully worked out to “level the playing field” between riders of different ages. There are also separate age standard for men and women.

Finally, the “plus times” are weighted according to the distances (because you are likely to have a bigger plus for 25 miles than for 5 miles). And to try and keep the calculations a bit simpler, we use the rider’s age at the start of the year.

Still reading? Well done. Here are the final standings in the year’s club Vet’s BAR. Once again Niall takes the win, but this time Alan Rodgers is really close in second place – just a few seconds quicker at each distance would make all the difference!

I hope some of you stats meisters out there enjoyed all that. As always, if you see any mistakes let me know. And enjoy the dinner!