Ards Town Centre races, promoted by Ards Cycling Club on Wednesday evening, were a huge success with over 110 riders competing in 5 separate races.

First up were the 23 novices, ranging in age from 5 to 11.  The younger riders were given a short head start, but the older riders soon made their way to the front of the field. After two laps, Odhran McCarthy emerged as the winner. Highlight of the night for many was watching the younger riders’ delight at completing their two laps, with Daisy Blayney (7) from Bangor and Evie Martin (5) from Newtownards sporting the biggest smiles of the night.

Next up were the 10 Under 12 riders, and after 7 laps Dylan Traynor’s long journey from Donegal paid off as he emerged the winner.

The Under 14 and Under 16 categories were merged into a single race. Unfortunately this led to a lot of confusion with overlapping number ranges, and many lapped riders. Ryan Orr (Ballymoney) and Harvey Barnes (East Tyrone) were clear winners of the U16 and U14 categories respectively, but some of the minor places were initially awarded incorrectly. Thanks to all who pointed out our mistakes. We’ll try to contact anyone who missed out on a prize over the next couple of weeks. Alternatively you can contact us here.

Agressive racing from the over 50s

Fourth race of the night was the combined A3/A4 and Over 50 riders. Two under 16 riders were also given special dispensation by Cycling Ireland to compete in this event. Despite some aggressive riding, they couldn’t escape the leading group. However they were still strong enough to finish first and second, with Jake Gray (East Tyrone) taking the win from Declan Mulholland (Clan Eireann). First senior was Philip Belshaw (East Antrim) with Martyn Lyttle (North Down CC) claiming first over 50. 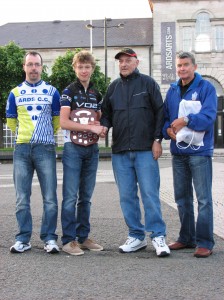 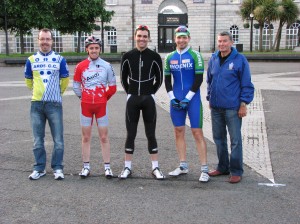 Final race of the night was the A*/A1/A2 senior race. Many of these riders have international experience, and their faster pace was clearly visible. An early break of Adam Armstrong (Eurocycle), Gary Cranston (East Antrim) and Marcel Koch (Phoenix) never looked like getting caught in spite of some strong chasing from Glenn Kinning (East Antrim) and Micky Murray (Clan Eireann), and they finished in this order.

Ards CC would like to thank the Police for getting the circuit closed to traffic and helping us to run a safe event, St John’s ambulance (thankfully not needed), commissaire Jack Watson, our sponsors Chain Reaction Cycles and The Belgium Project, and all the club members who turned out to help on the night. And thanks to all the riders for turning out and making such a great night of it.

And if whoever currently has the club’s hi-res video camera could return it that would be greatly appreciated, and might help us avoid judging problems in the future.

Club secretary Lindsay Gamble in pensive mood before the start of the main A*/1/2 race.

Proof that senior riders can smile too!