Andrew McCullough (Kinning Cycles) was a worthy winner of the main A1/2/3/Jun race at the Ards Town Centre Races on Wednesday evening. 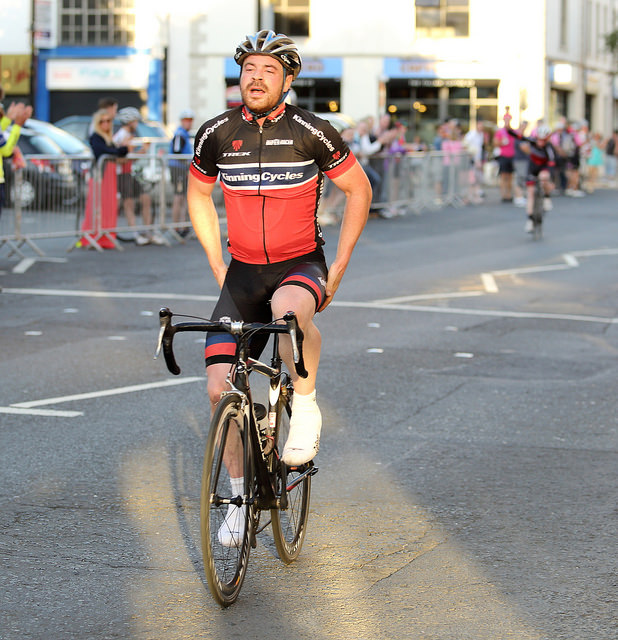 The  race was run as a short handicap, with the A1/2s giving away 40seconds to the A3/Juniors. The attacks starting immediately, with junior rider Evan Donoghue from Letterkenny holding a small advantage for couple of laps. He was soon replaced at the front by Andrew McCullough. Behind, the A1/2s had caught the main bunch, and the counter attacks came thick and fast. It was Glen Kinning (also from Kinning Cycles) who eventually managed to escape the bunch, but Andrew managed to hold on for the win. U16 rider Jake Gray (East Tyrone CC) took the bunch sprint for third.

Earlier in the evening, the combined A4/Vet/Ladies race was won by Ronnie Smyth (Dromara) in a bunch sprint from Mark Short (Phoenix) and Colin McClarnon (North Down CC). Commonwealth Games selected rider Clare Oakley finished comfortably in the bunch with the men to take first lady. 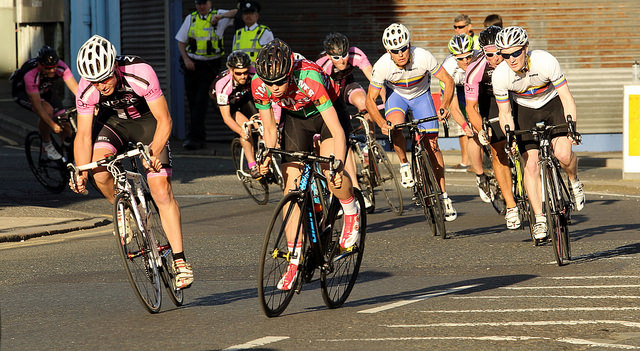 The A4/Vet/Ladies riders attack at the Old Cross corner

There was also a full programme of underage races.

In the U16 race, Harvey Barnes (East Tyrone CC) took the win from Will Hamilton (North Down CC) and his team mate Jake Gray. Jake was given special permission by Cycling Ireland to ride the main senior event, and took third there too, which gives you some idea of the standard of these young riders!

The U16 podium, with club secretary Lindsay Gamble

In the U14 race, it was Errigal CC who dominated, with Conor Halvey  taking the win from team mate PJ Doogan and Harry Dow (North Down CC)

The U14 podium, with Irish inter national mechanic Lindsay Gamble

Finally, there was the highlight of the night for many – the novices race. This year riders varied in age from 3(!) up to 13. The organisers applied a very rough handicap based on age, and Adam Rafferty emerged as the winner, from Neil Kelso and Finlay Mayne. 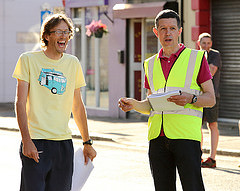 Judging is a serious business Paul…. 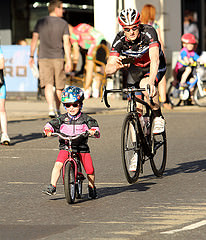 Finally, thanks to all the people who made this great event possible – the police for closing the roads and helping to get cars off the course, the first aiders, the commissaire Jack Watson, the club committee and club members for all their work in advance and on the night, the riders and supporters (many of whom had travelled a long way), and to David McVeigh for some great photos. Click here for the full set.