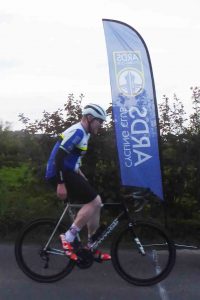 In spite of a cold breeze, and competition from the football, nineteen riders lined up for the first club road race of the season this evening on the tough Ballygowan circuit. The handicappers generously gave the A4 group a two minute start on the A3 group, with a further three minutes back to scratch. The front groups sensed an opportunity, and quickly got down to work.

Although the gaps closed, the leading A4s stayed away. Alan Patterson (Ards CC) opened a slight lead at the finish to take the win, with Mark Allen (Ards CC) taking second, and Daniel Watson (North Down) leading in the remainder of the combined A4/A3 groups a few seconds later. Calum Orr (North Down) was fourth, Barry Greer (Kinning) was fifth, and Barry Mitchell (Ards CC) rounded out the top sixth.

Ricky Topping, in scratch, was the only other Ards finisher about a minute behind the winner.

The early standings in the club handicap road race trophy are listed in the table below. 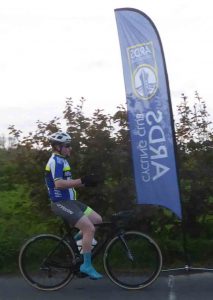 Thanks to all the marshals, judges and time keepers for supporting the event on a chilly evening. Much appreciated. Hopefully spring temperatures will have returned again by next Tuesday.