The handicappers separated the first two groups by 3 minutes at tonight’s road race in Carrowdore, with scratch a further 3 minutes behind. The front groups merged on the fourth lap. Scratch split under the pressure of trying to catch the combined group, with just three riders getting across – Ian Inglis (Black Rose), Glen Kinning (Kinning Cycles) and Ricky Topping (Ards). 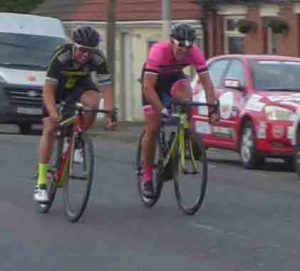 Ricky takes the sprint for fourth

The pressure continued on the final lap, with Ian opening up a slight gap to take the win, a couple of seconds ahead of Glen, with Stephen Watty (North Down) also just off the front of the bunch in third place. Ricky took the sprint for fourth, just ahead of Johnny Web (North Down) and Geoff Brennan (Ards CC). Barry Mitchell, Roman Sarvas and Andrew Allen took the remaining points for the Ards CC Handicap Road Race Trophy, but it is Ricky who extended his lead in this competition.
Thanks to the marshals, handicappers and judges for another great race tonight. It’s a club run next Tuesday, and we have the Ards Town Centre Races next Wednesday – it’s always a great night’s entertainment so don’t miss it!