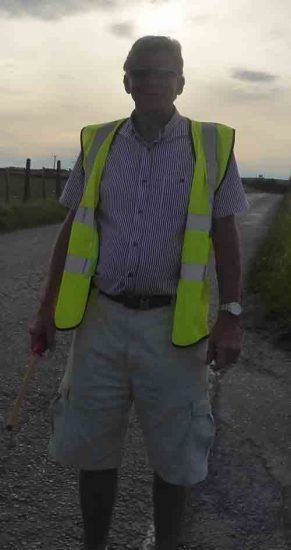 Thanks to Desi for marshalling tonight on his birthday. Is that a halo around his head? Very much appreciated as always!

The handicappers split tonight’s 40 riders into 4 groups, and gave the limit group a 5 minute gap before starting the A4s, with further gaps of 2 minutes to the A3s and 2 minutes to scratch.

The limit group thanked the handicappers for their generosity, and quickly got down to work. With experienced vets like Tom Henry and Anthony Mitchell in the group, they were soon moving rapidly.

Behind, the other three groups were also working well, and had merged together by the end of the fourth lap to created one big chasing group. But despite some strong riding they were still a minute behind at the finish.

In the sprint for the line, it was Anthony Mitchell (Bike House) who took the win, over 40 years after he first started racing with Ards CC. Second was Mark Hodgins (North Down), with new member Glen Moore rounding out the podium and taking first Ards rider. Anthony’s daughter Rachel Irvine (Bike House) hung on to take fourth in spite of losing her father’s lead out. Fraser Morrison was 5th, followed by Sam Carson (North Down), Tom  Henry (North Down) and Craig Browne (Ards CC, and second Ards man). 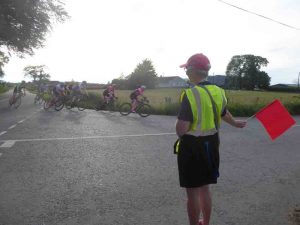 Here are the latest standings.

Thanks as always to the marshals, handicappers and judges. We couldn’t run these events without you, and your work is very much appreciated. Riders are reminded that marshals are only there to show direction, and have no authority to stop traffic. I was a bit shocked tonight to hear a rider shouting abuse at a marshal for not stopping a van. The rider was on the wrong side of the road at the time on a blind brow, and the marshal had tried and failed to stop the van. Club races are not run on closed roads, and riders must take responsibility for their own safety and ride within the rules of the road. Rant over. Thanks.