Today’s WIREFOX Tour of Ards was one of the best ever – beautiful weather, exciting racing, a high  average speed (over 27mph) and a worthy winner! Here are 20 pictures that tell the story as it unfolded… 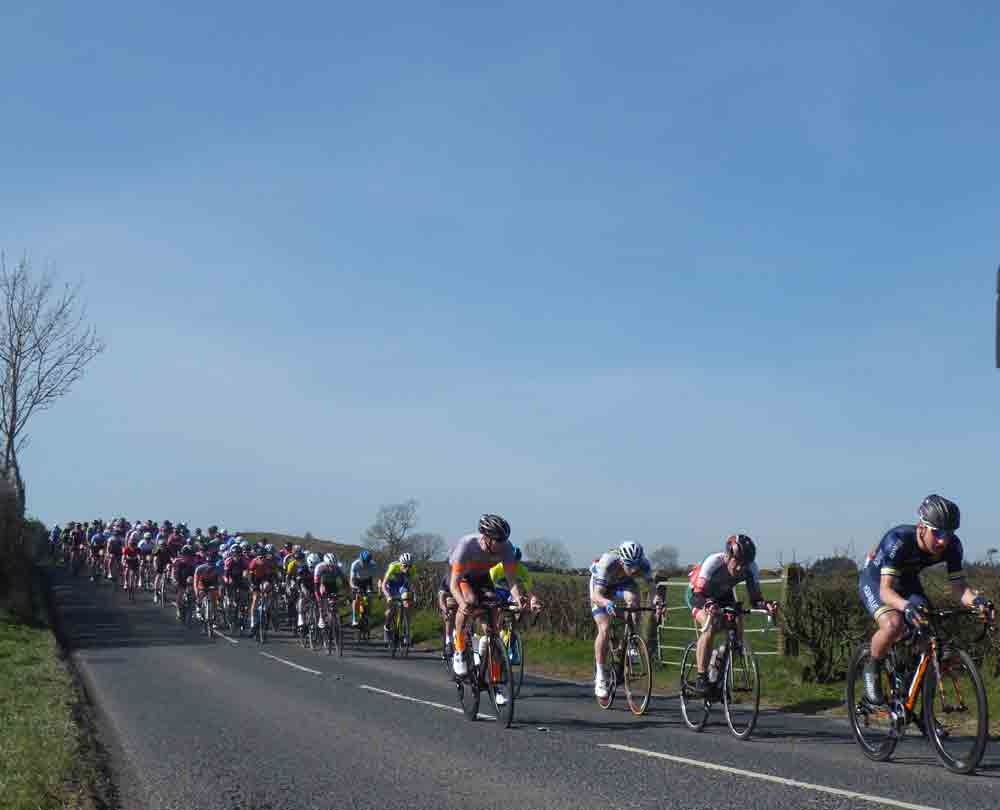 The race was run in warm, calm conditions. A full field of 80 signed on. The attacks started as soon as the flag was dropped 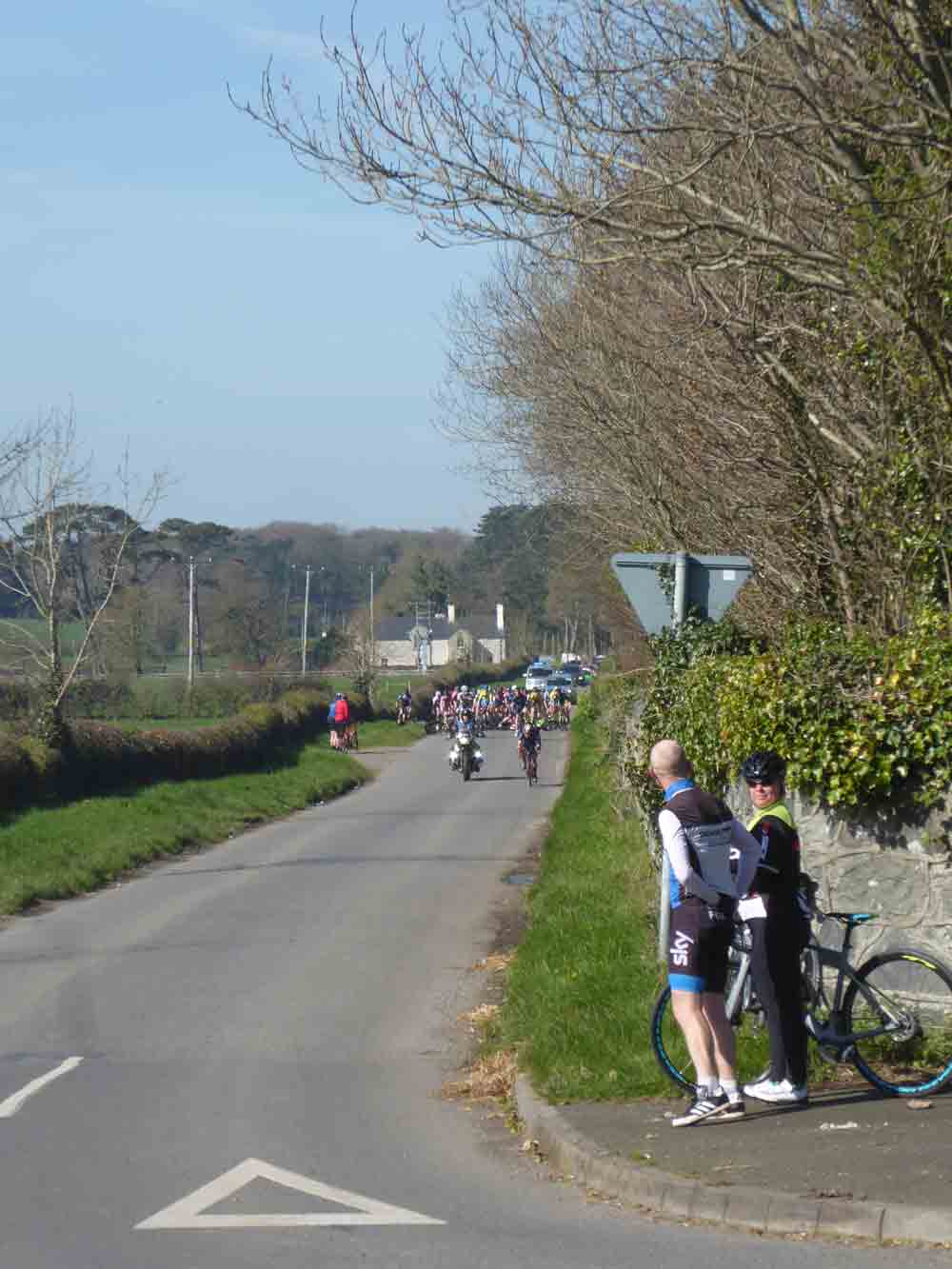 There was a crash just outside Ballywalter, and a couple of riders retired. There were the first signs that a break was forming, with 4 riders just off the front. The fantastic weather brought out the spectators. 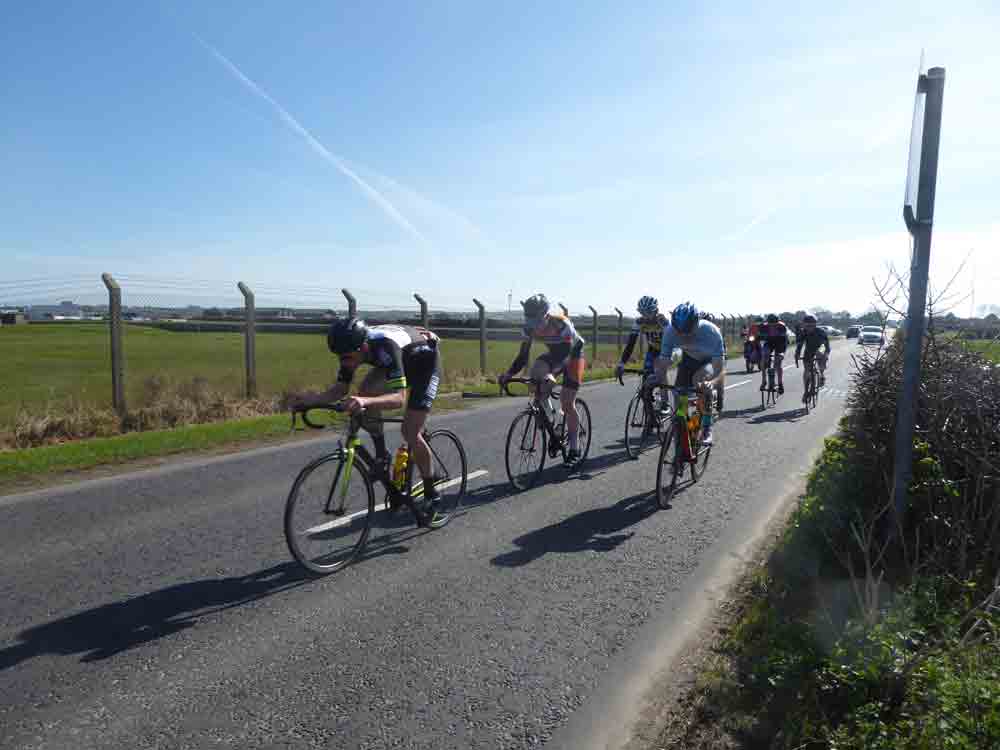 By Kirkistown, the break had grown to 7 riders, and they had 25 seconds on the bunch. 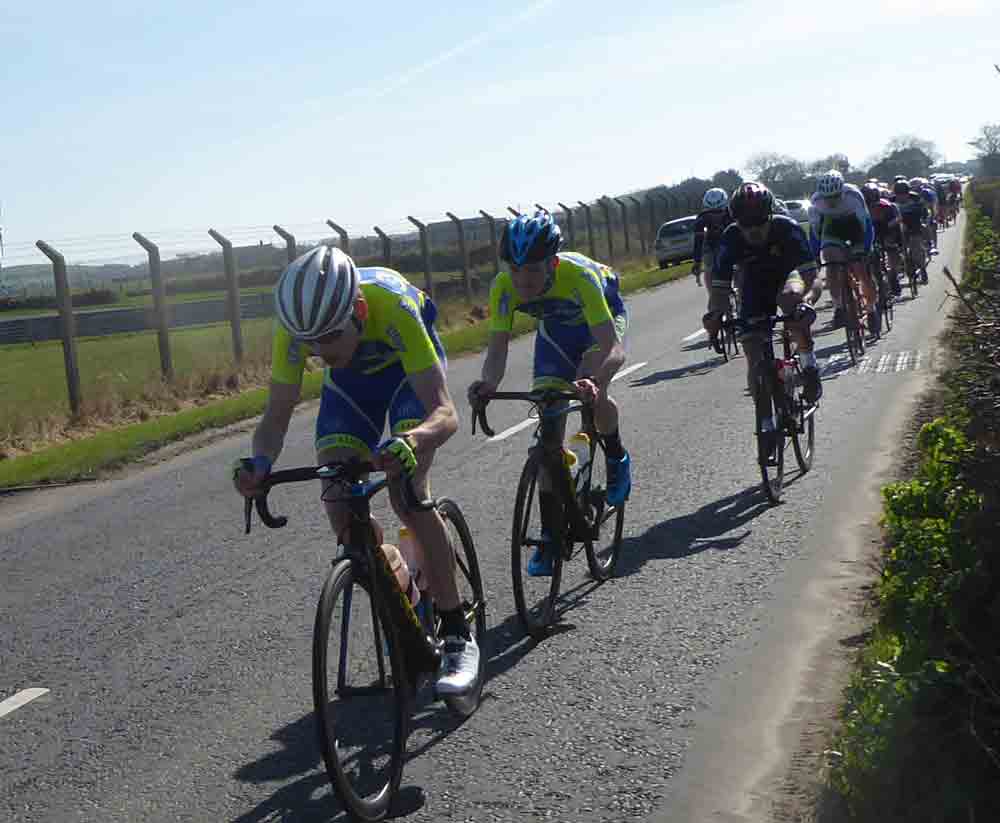 In the bunch, Lucan CC riders Conn McDunphy and Dermot Trulock had sensed the danger, and were driving the chase. The bunch was well lined out!

By Abbacy Road on the first lap, the break had 30 seconds. The gap peaked at 40 seconds. 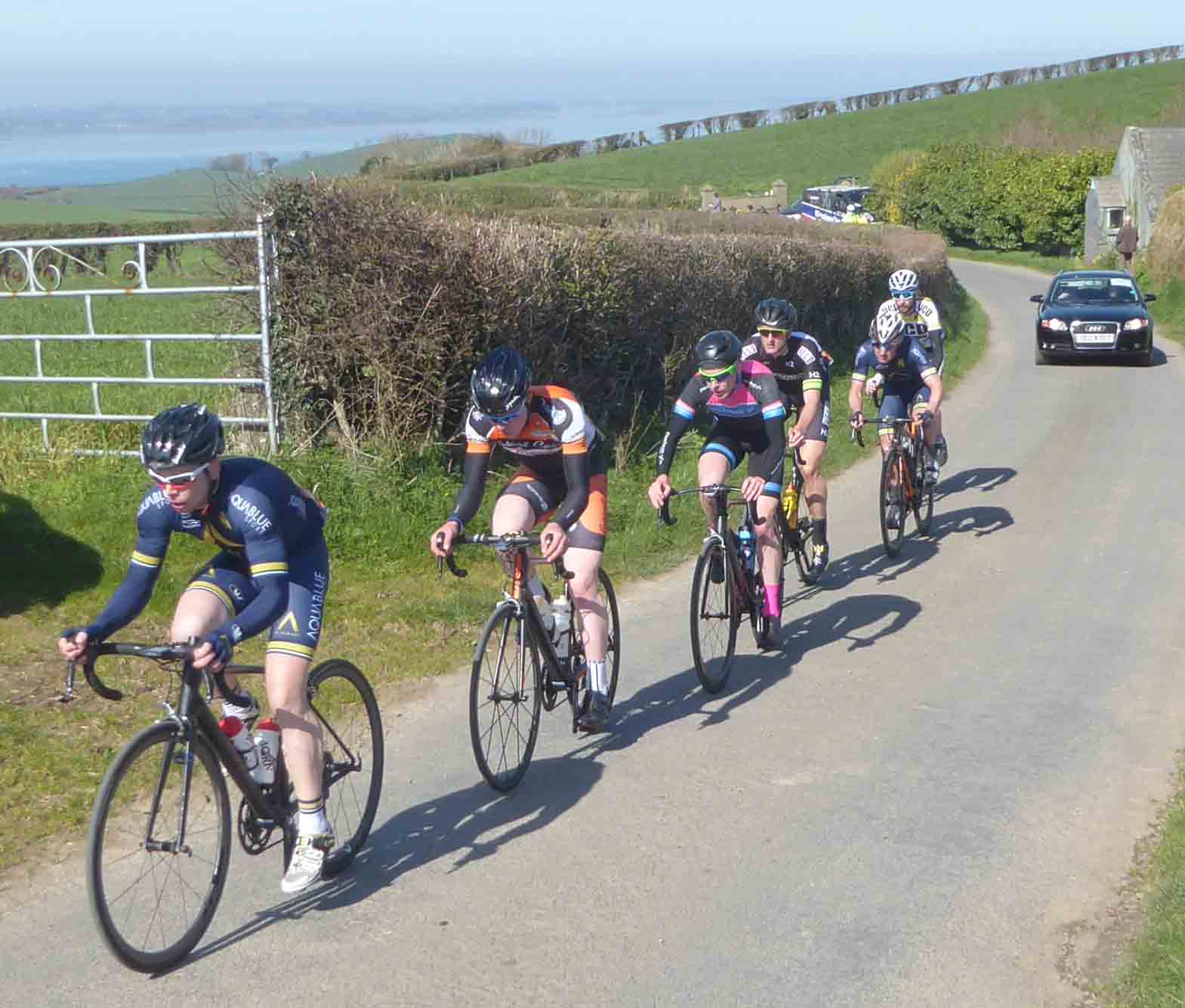 By the top of Mountain Road on the first lap, the break was down to 6 men, and the gap had dropped to 25seconds. 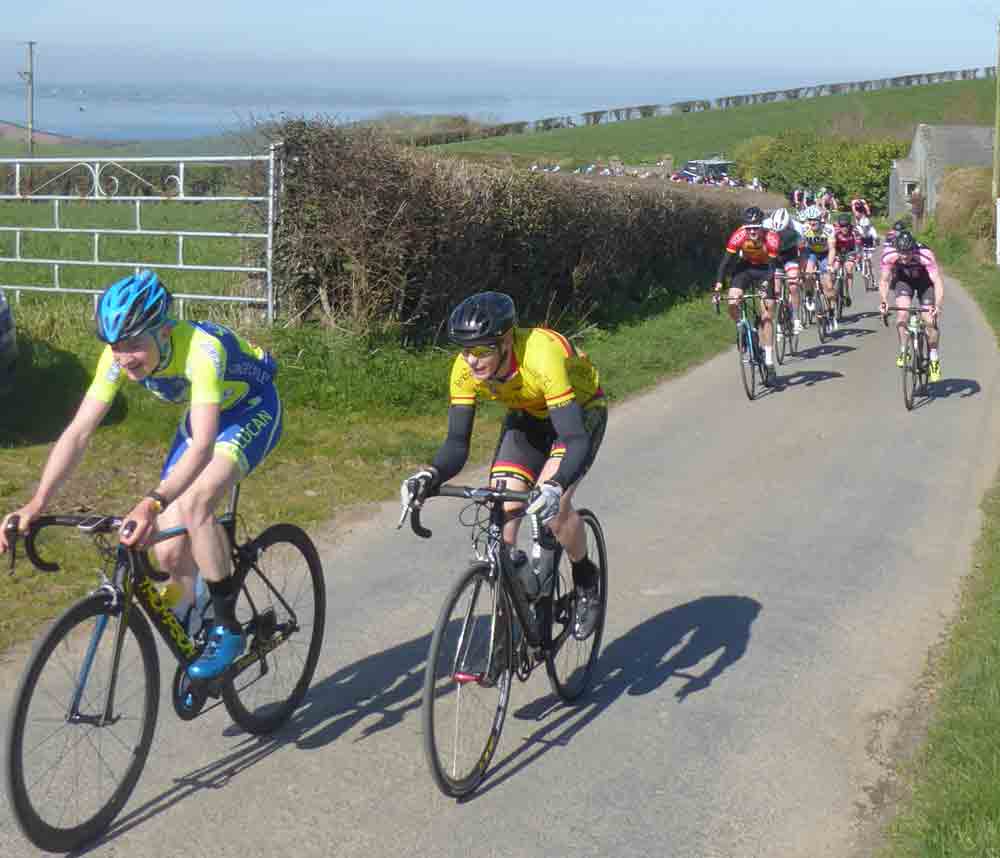 Lucan were still doing a lot of driving in the chase, with the bunch starting to fragment on the climb 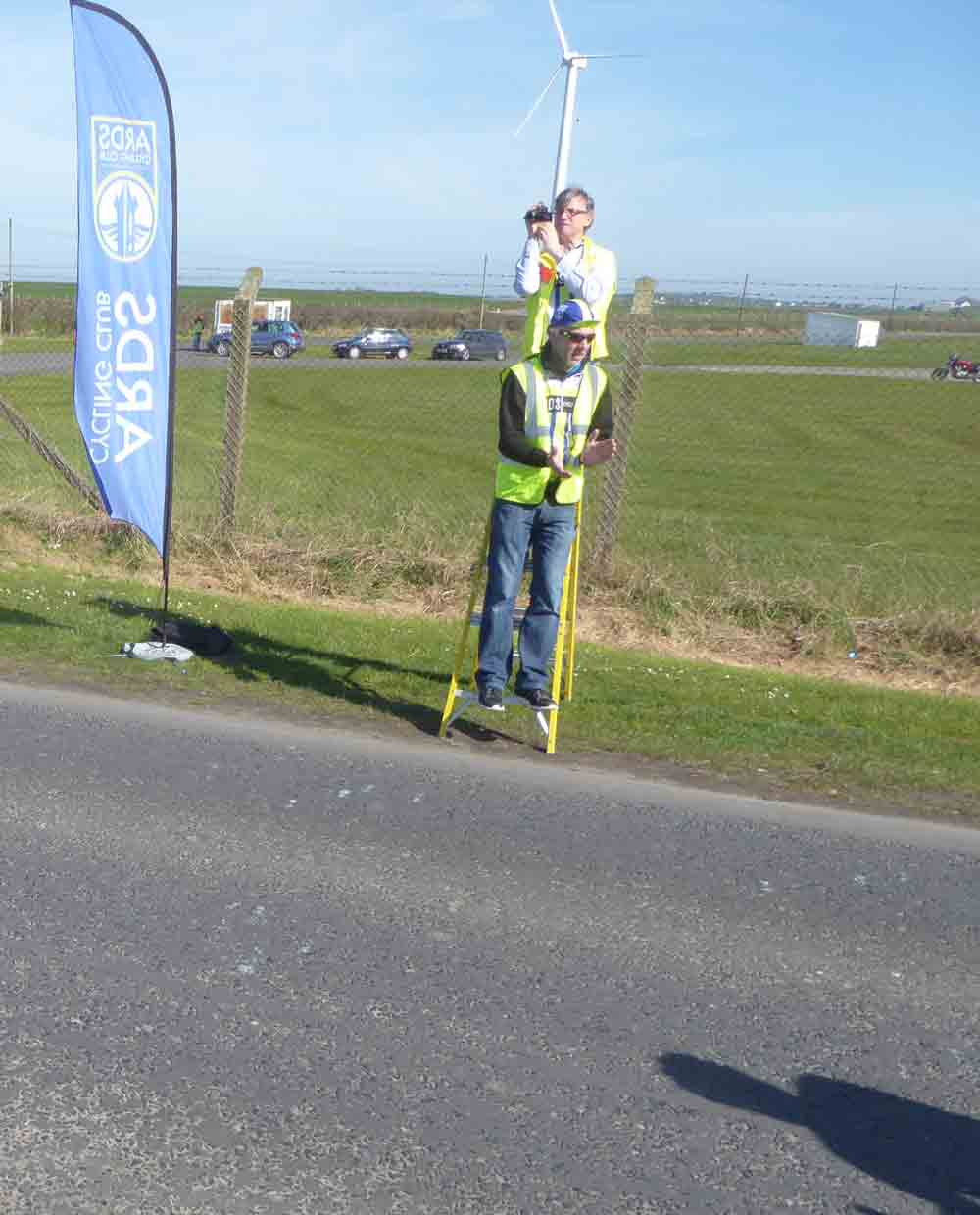 The judges and marshals did a great job today. This is the SeeSense sprint on the second lap. Unfortunately the photographer only caught Marc Potts’ (Neon Velo) shadow as he took the sprint from his breakaway companions. The bunch were closing rapidly…

By Abbacy Road on the second lap, the break was down to 3 riders, and the bunch was breathing down their necks.. 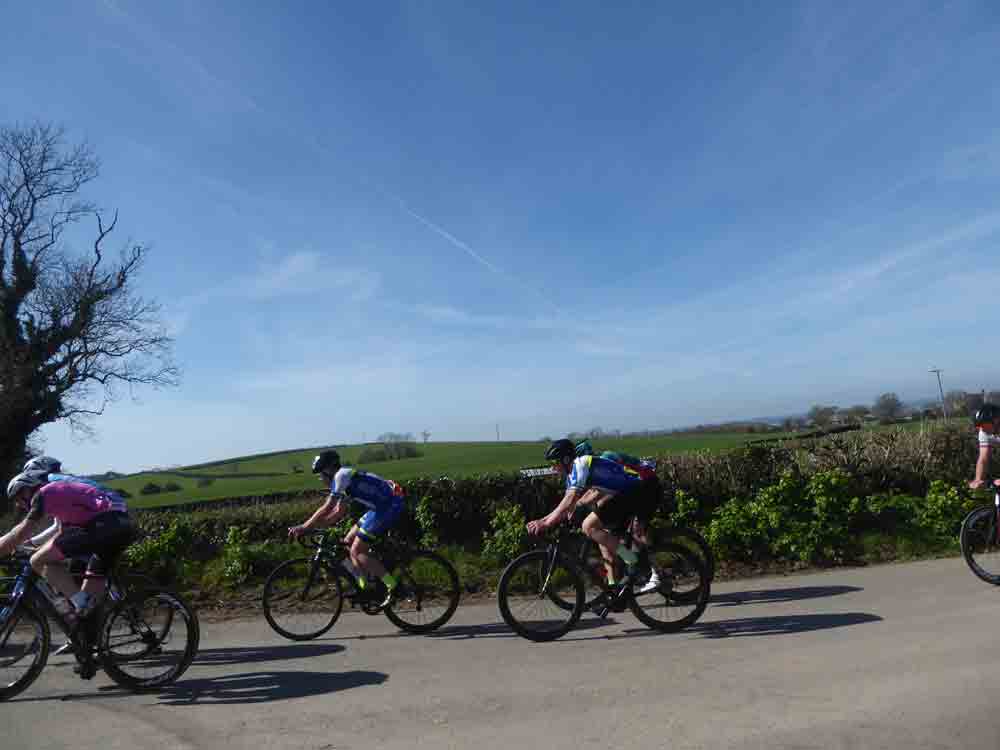 By Cloughy on the second lap, it was all together again at the front of the race, and the riders were starting to look at each other. 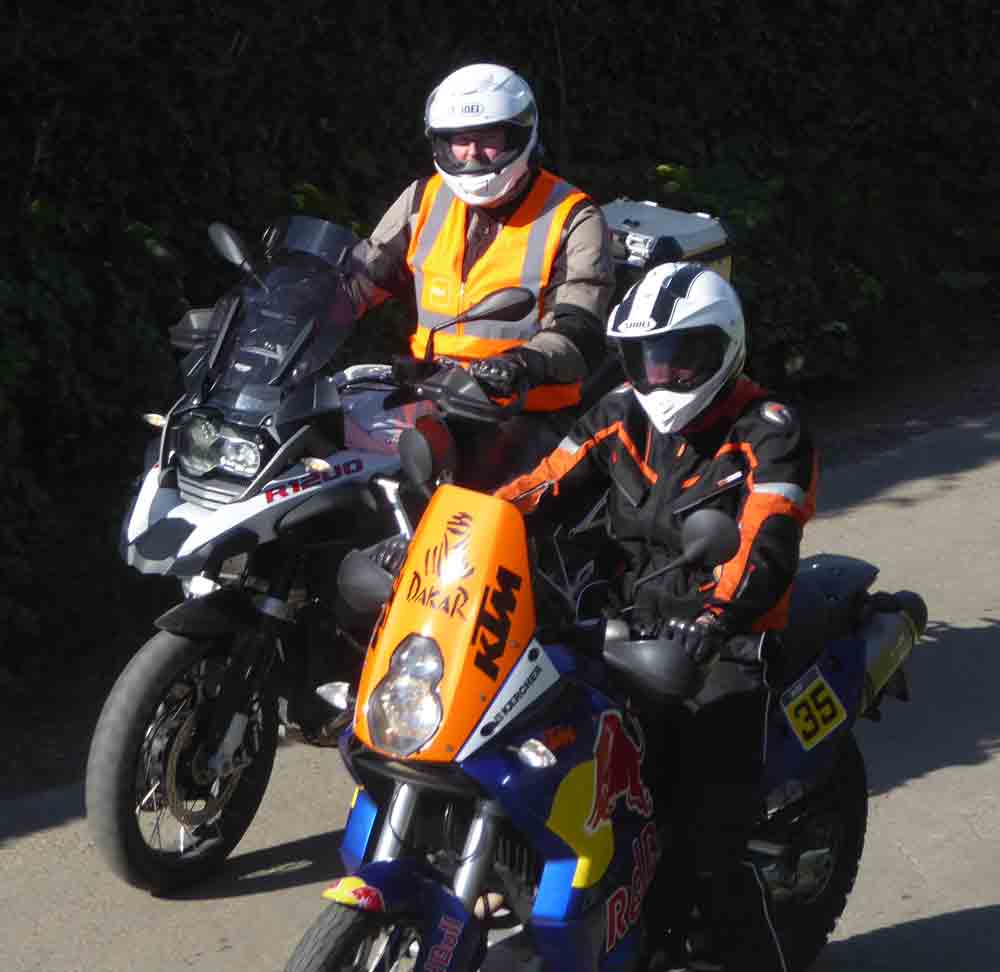 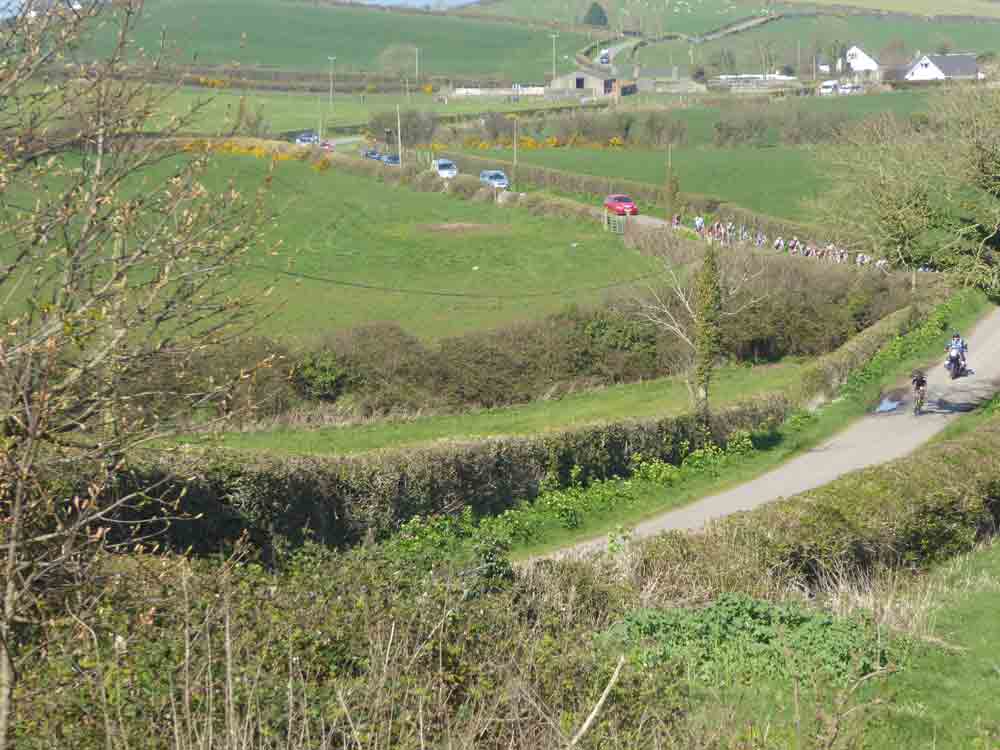 On the approach to the old abbey on Abbacy Road, a lone rider dangles off the front of the significantly depleted bunch on the 3rd lap. 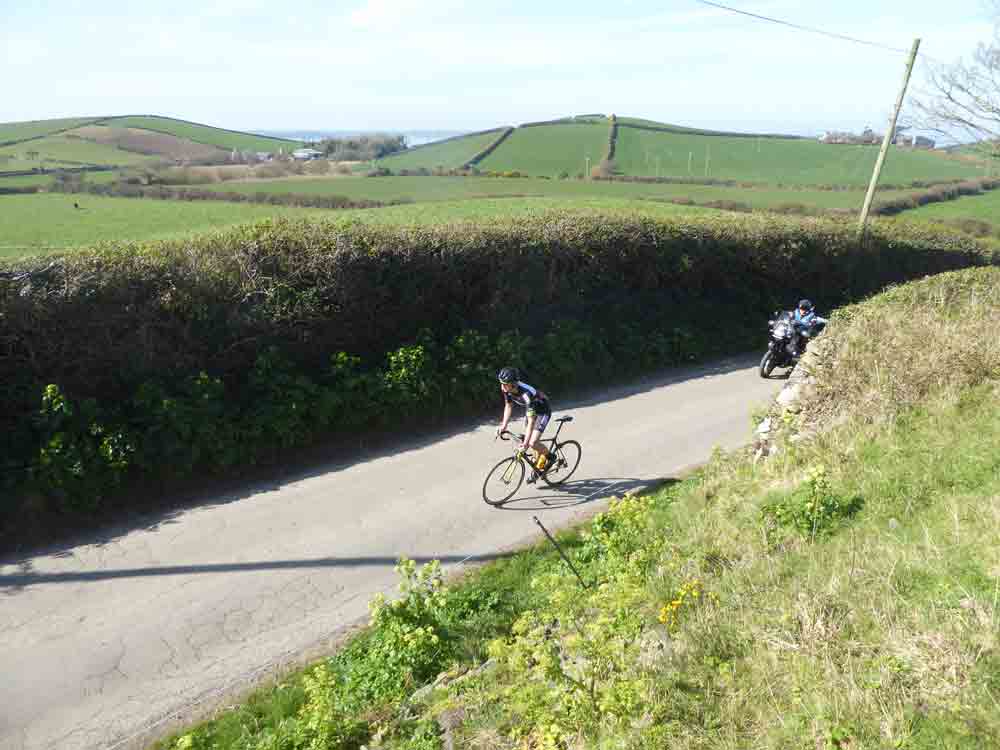 He’s looking good on the climb past the abbey….. 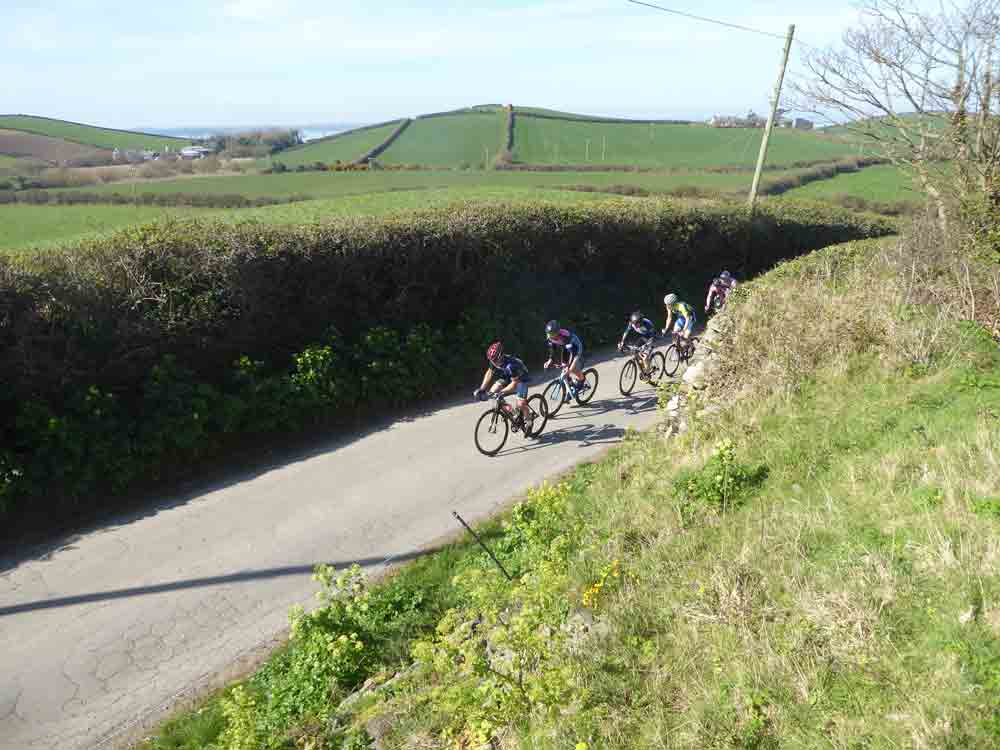 But the bunch aren’t giving him much leeway, and he would soon be caught. 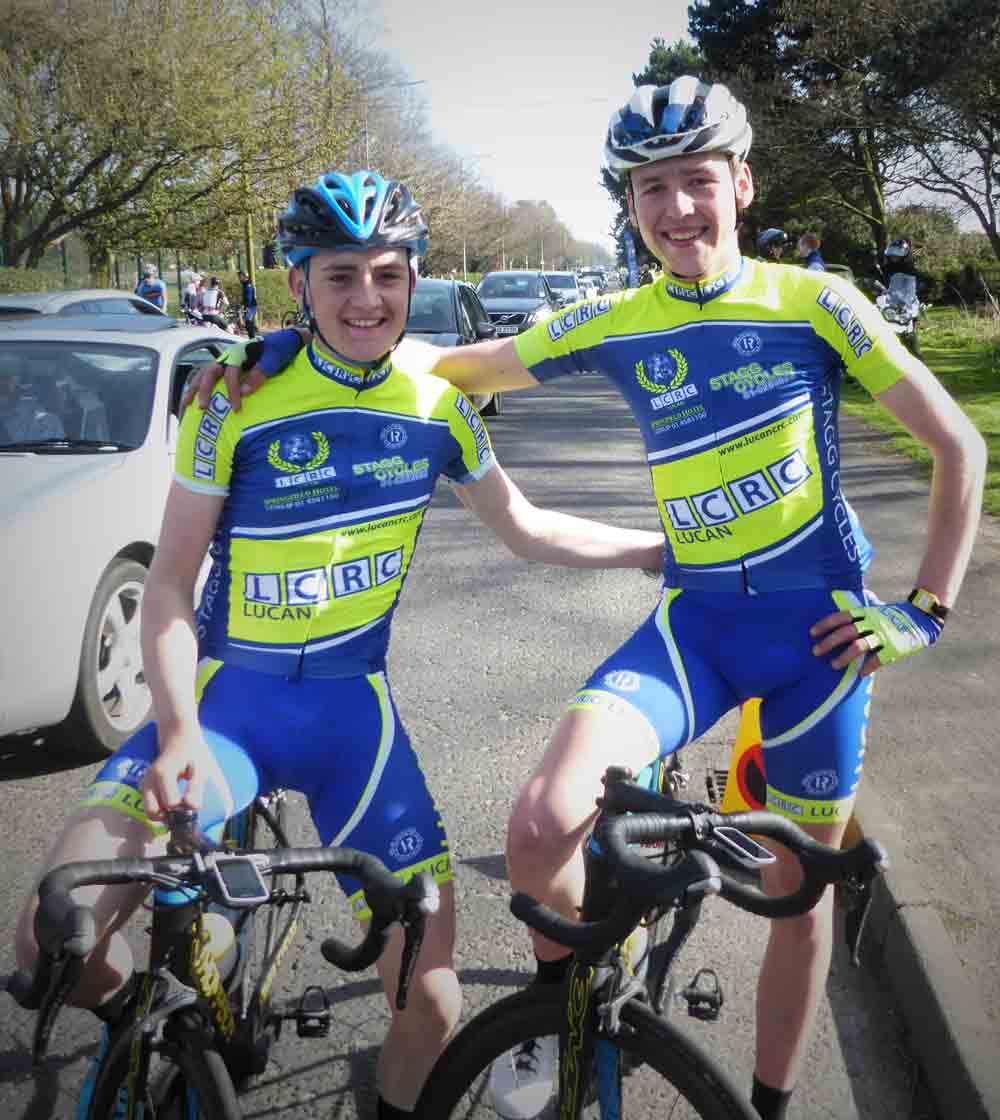 There were numerous skirmishes on the run in to Newtownards, but nobody could stay away until Conn McDunphy (Lucan CC) attacked with 2 miles to go. He managed to hang on for a well deserved win, with the bunch just 3 seconds behind at the line. Conn (right) is pictured here at the finish line with team mate Dermot. 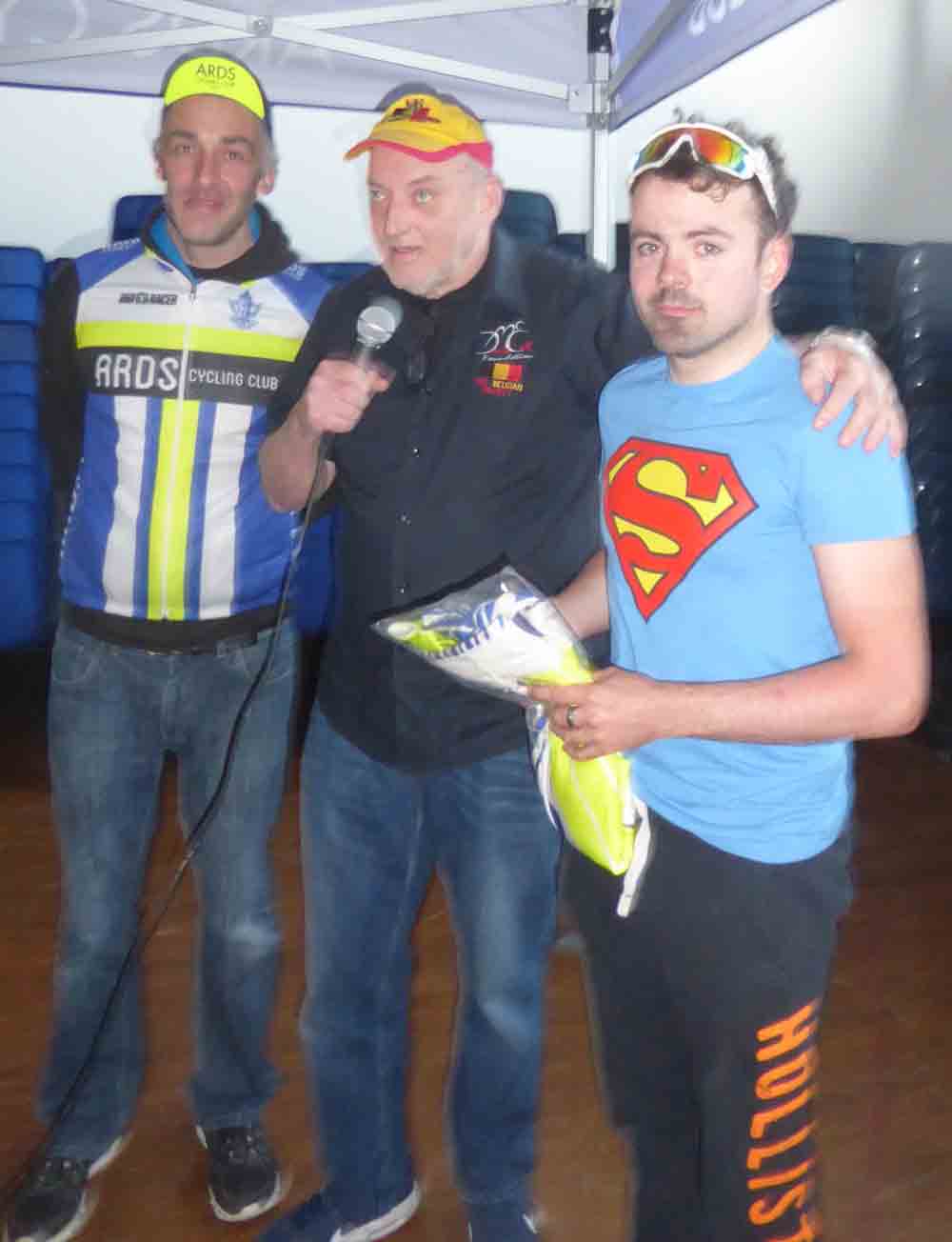 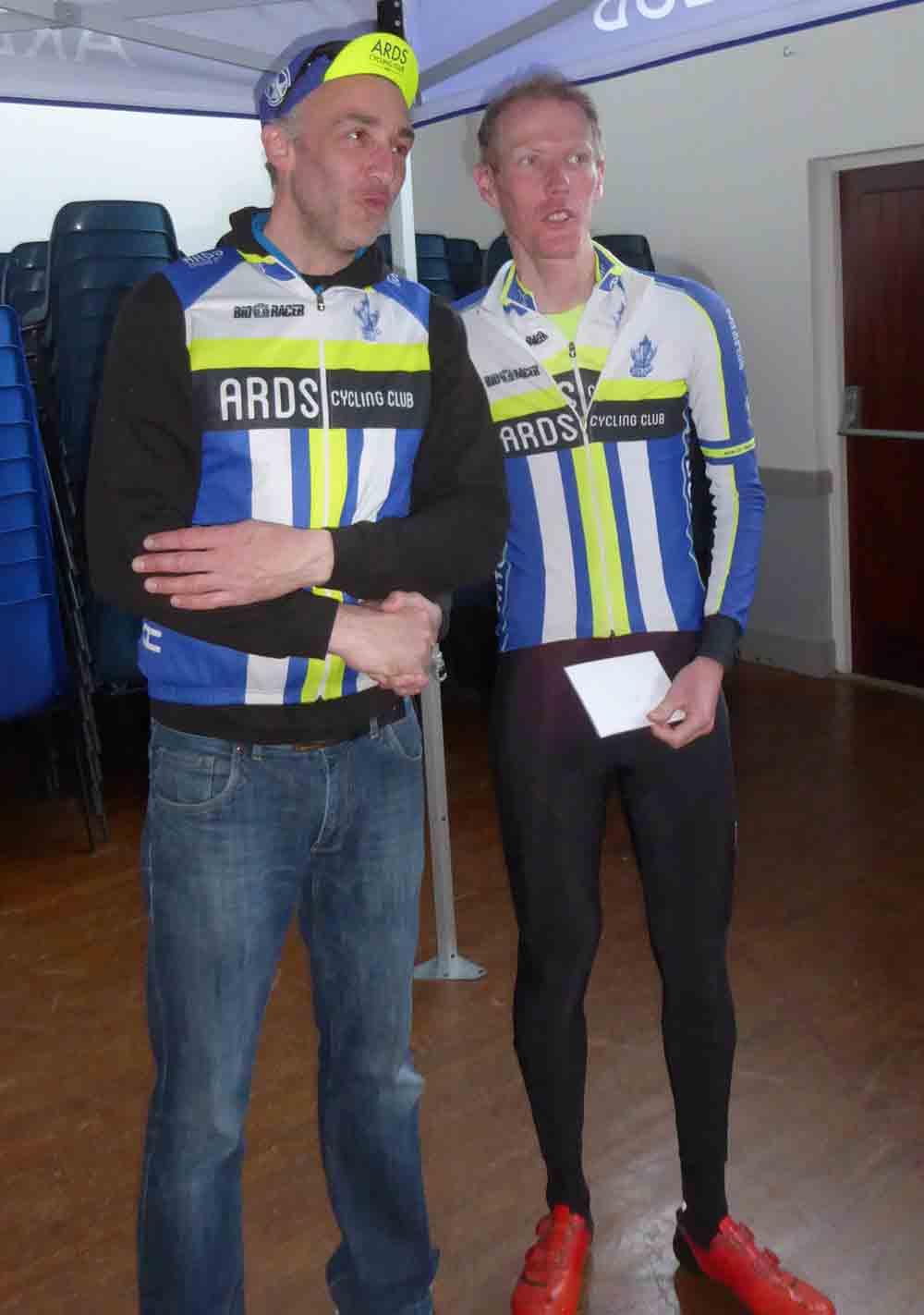 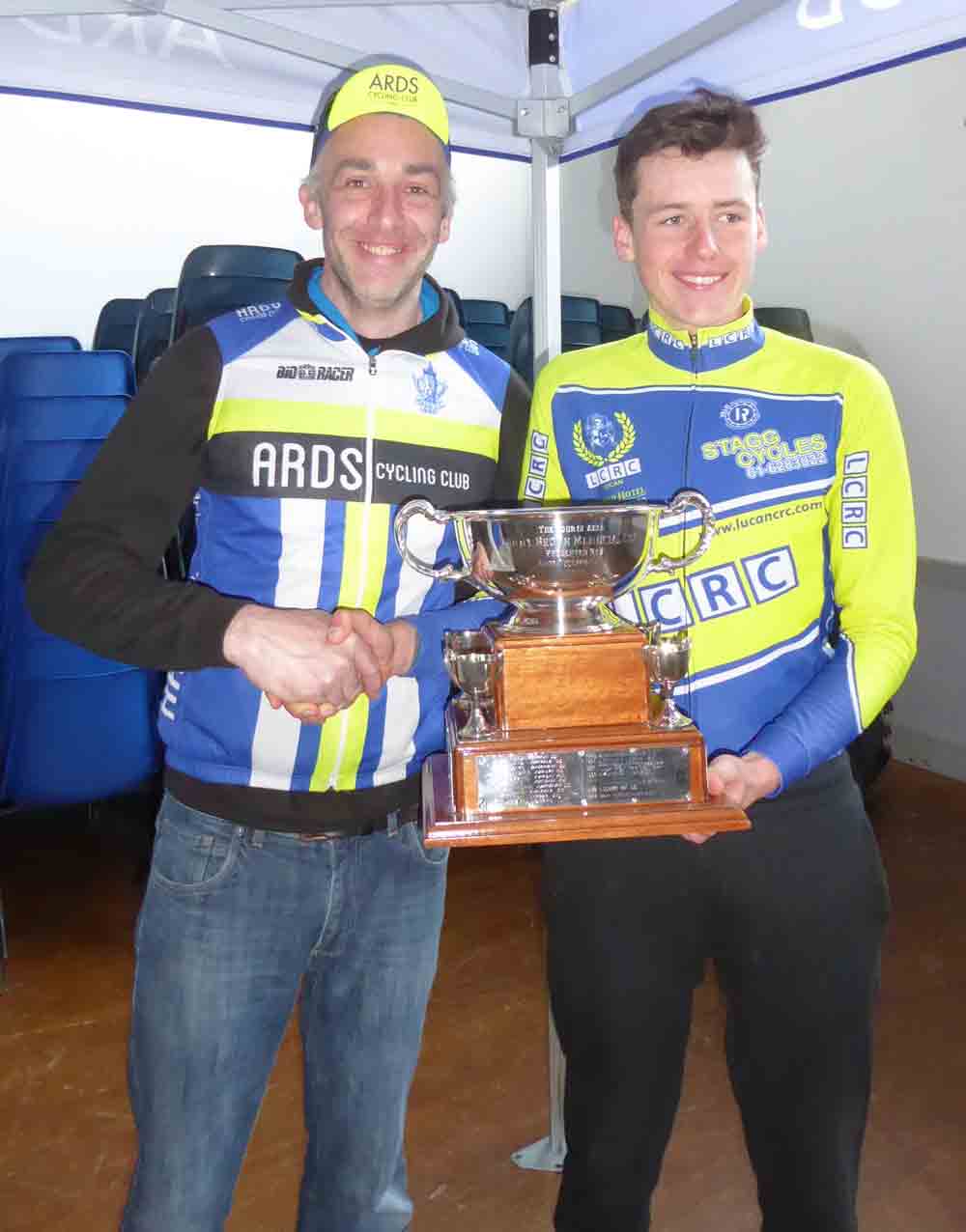