Thirty nine riders signed up for 5 laps of the Orlock circuit tonight – the first club road race of the season. The time keepers split them into 3 groups, with the limit group getting five minutes on the big middle group, and a further two and a half minutes on the 8 man scratch group. 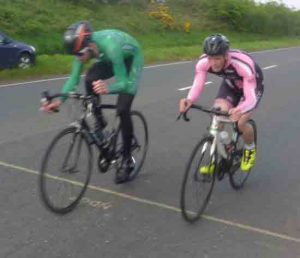 Ian and Mark with a lap to go

The groups worked well, but by the end of the third lap scratch had reached the sharp end of the race, and Ian Inglis (Black Rose) and David Hamilton (North Down CC) were just off the front. Next time round the gap had grown to almost a minute, and the race for the win was between these two. Ian, just back from a successful racing trip to South Africa with the Irish Paralympic squad, was looking strong, but in the wind assisted drag to the line it was David who took the win.

Thanks as always to the marshals, time keepers, lead car drivers and judges for making it a safe event. Riders are reminded to keep the road clear after the finish for their own safety, and to avoid unnecessarily antagonising other road users. Thanks.