This week we’re featuring one of the most famous Ards CC trophies – “The Weir” Perpetual Challenge Cup, presented to the club by William Weir Esq, Kircubbin, for 10 mile time trials. 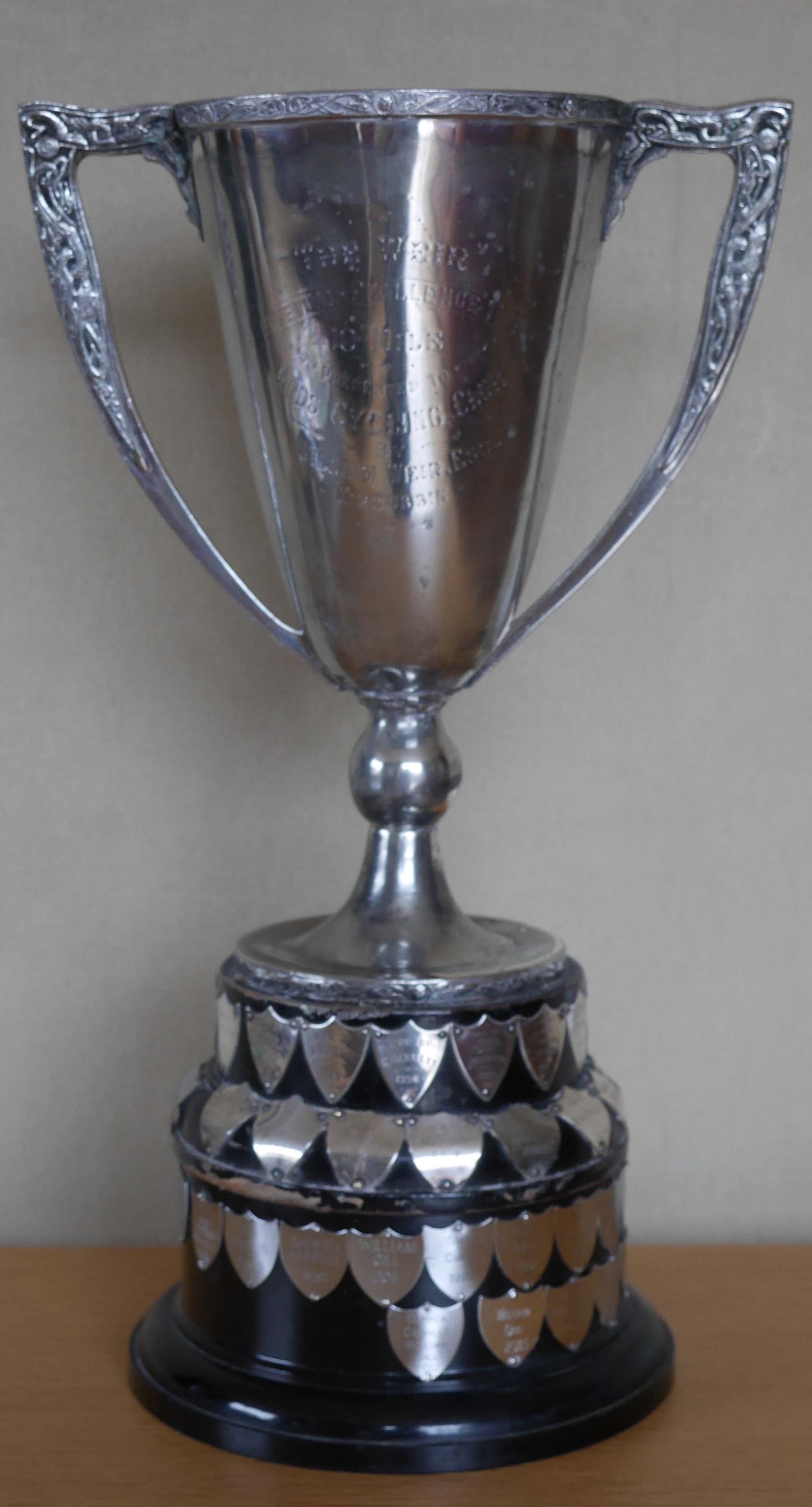 You may have read some of the history behind this trophy in “Ards CC – A history in 75 stories”, but below we’ve found some more anecdotes about Willie from an article by Billy Kirk in the book “Recycled Memories”. We’ve also listed out the first 20 winners at the end of the article. Like the Burrows Perpetual Cup we reviewed a few weeks ago, there are some famous family names in this list.

“The Kircubbin shoemaker, Willie Weir was the great cyclist of the Ards Peninsula in the early years of the last century until the first years of the great war. 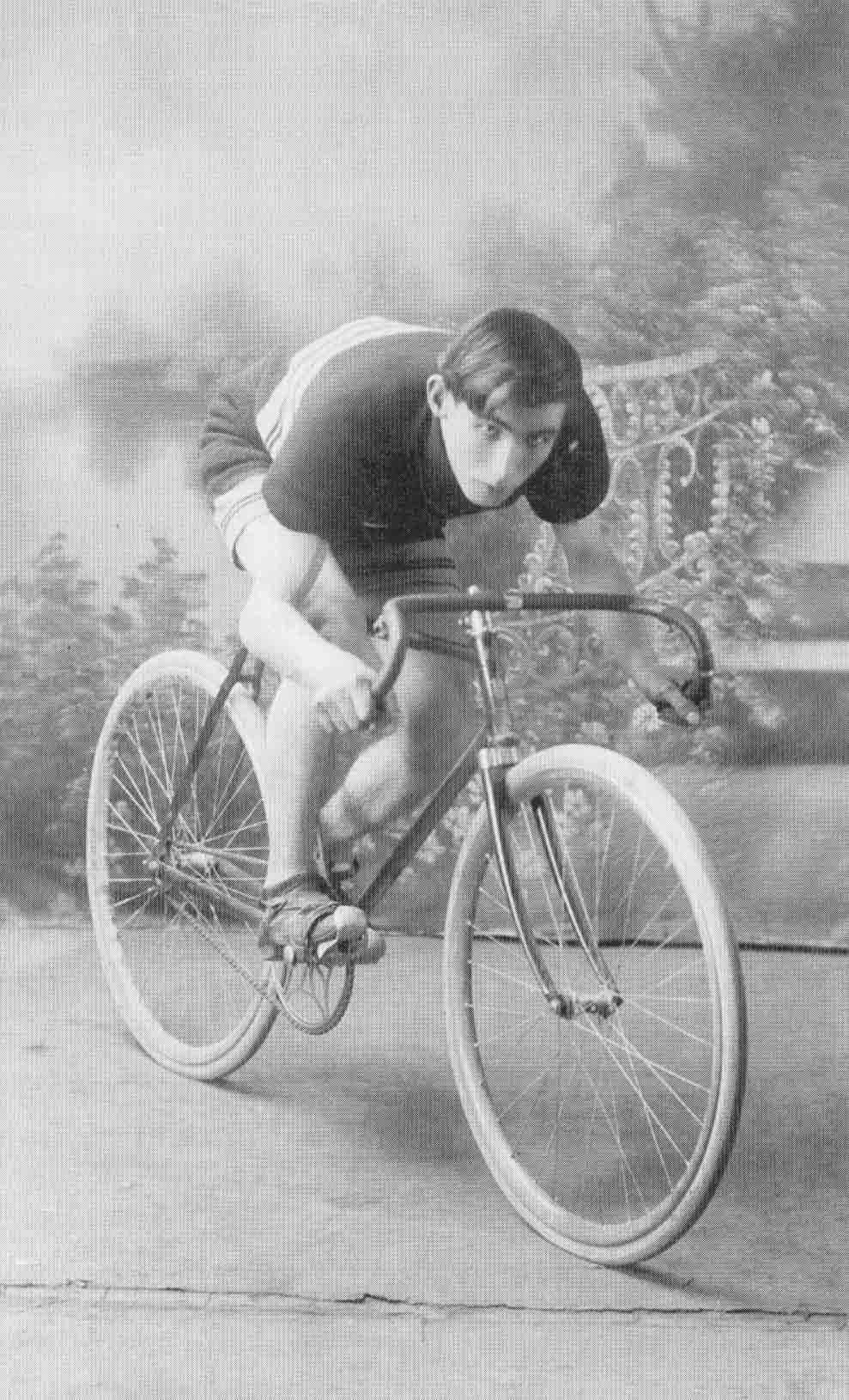 Born on 14th January 1894, he started racing in 1910 on grass tracks at various parish sports meetings all over the area. He was known to bring home prizes such as Wag-at-the-wall clocks, tied to his back with baling twine. In fact he won three of these in his career, one of which still exists in the home of his son John. 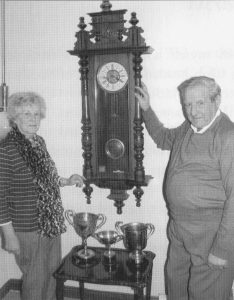 Willie Weir’s daughter Hannah and son John with a clock won by their father 1912.

He also rode time trials and is reputed to be the first person to get under the hour on the Portaferry Road – for 20 miles! These efforts may have been in Belfast CC club races.

Willie and his daughter Hannah performed as turn stewards for Belfast, Cyprus and (later) Ards Cycling Clubs, whose 20 and 25 mile events turned at Kircubbin’s Main Street and Saltwater Bridge. When Ards CC was founded in 1944, Willie soon became a member, eventually becoming president in 1947. I well remember him timing my first efforts on the Portaferry Road.

He followed many sports with enthusiasm, especially boxing. Rinty Monaghan, who became World, European and Empire Champion in 1948, was his hero. That year, Willie travelled to the Olympic Games in London. He misjudged the money he might need, and returned home with enough spare cash to buy the Weir Cup for Ards Cycling Club – a trophy still raced for to his day. 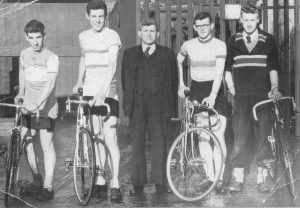 His daughter Hannah tells a nice story of one of her father’s trips to Belfast to see Rinty Monaghan fight. It was on 23rd March 1948 when the Belfast man defeated Jackie Patterson to take the above titles at the Kings Hall. She tells that the family were anxious when Willie failed to get off the last bus from Newtownards. When one and two o’clock passed with no sign of him they became increasingly worried and were taking turns to run to the door to see if he would appear. Finally, at 2.30am, they saw a dark figure on an oversized bicycle come labouring up the street. It was him. Exhausted and dishevelled, Hannah also noticed he was not wearing his soft hat. He explained that the trolley bus journey from the King’s Hall had not been in time for the last bus ‘for Newtown’. However he caught another trolley bus to Dundonald and from there walked to Newtownards. He called hopefully with a friend who lived in a tiny cottage at the flood-gates. There he was offered the loan of the big bike upon which he just about made it home. After excitedly telling them all about Rinty’s great success, Hannah, still a teenager, cried out, “but Daddy, what about your hat?” Whereupon he replied, “Oh, that. Sure I threw it up in the air and it didn’t come down“.